Sent to DS from Richard C. Cook with permission from the author to post. 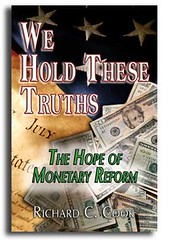 We Hold These Truths
by Richard C. Cook
Originally uploaded by Dandelion Salad

Richard Cook‘s new book, We Hold These Truths: The Hope of Monetary Reform, cuts through the nonsense and reveals the root cause of today’s economic crisis; a privatized credit system gone haywire. This is first-class analysis from a prescient reformer whose message is just now catching fire. While the pundits are still hung up on subprime mortgages and toxic assets, Cook has peeled the cover off our deeply-flawed monetary system and exposed the rot within. This is where the change needs to begin.

We Hold These Truths is a timely book that challenges conventional thinking about credit and the role of banks. As the author points out, “In a system where the banks have a monopoly on the issuance of credit, they inevitably become the most powerful entity in the economy and therefore the most powerful politically as well.” Cook’s observations are particularly relevant today, now that many of the same people who pushed for deregulation during the Clinton and Bush administrations have been appointed as key members of Obama’s economics team. It’s clear that Wall Street has further tightened its grip on Washington even while it continues to wreak havoc on the financial system. It’s no wonder Thomas Jefferson concluded that, “Banking establishments are more dangerous than standing armies.”

Cook’s strong suit is taking complex economic ideas and breaking them down for his readers. He devotes a fair amount of time to explaining the fundamental mismatch between what the country produces and its net earnings. This gap between GDP and purchasing power can only be filled through the issuance of credit. The problem is, that as borrowing increases, the ballooning debt becomes more unmanageable and the system begins to teeter. Wall Street’s reckless expansion of credit simulated prosperity for nearly a decade, but when the bubble burst, the financial system collapsed, creating the present downturn.

Cook believes that a National Dividend–which would come in the form of a check from the government to every man, woman and child in America–could make up for the loss in purchasing power and maintain economic stability. This is not “pie-in-the-sky” liberalism, but a reasonable proposal designed to stimulate business activity and avoid disruptive recessions.  He also advocates public control of credit: community-run investment banks which operate as public utilities and provide low interest loans to consumers and businesses. These ideas were implemented during the Great Depression via the Reconstruction Finance Corporation (RFC) and the Home Owners Loan Corporation (HOLC) They were successful programs that helped build America’s middle class while seizing control of the mortgage industry from Wall Street speculators.

Cook also supports a basic income guarantee for every American regardless of whether they work or not. This is a defining issue that should be debated in terms of the value we place on human dignity. Everyone deserves a minimal standard of living. The last time Congress considered such an initiative was Nixon’s Family Assistance Act of 1970. The “reverse income tax” was voted down by a coalition of southern Democrats who opposed it mainly on racial grounds.  Senator George McGovern who supported the bill said that “it would have provided a basic underpinning of income for all Americans.” Income guarantees are stimulative and help maintain demand. They are good for the economy and demonstrate the nation’s commitment to provide for those who are most in need.

We Hold These Truths is a book for people who want to understand the current crisis without getting bogged down in hand-wringing and negativity. It’s a blueprint for removing the gangrenous parts of the financial system and for establishing a dividend-based system that better serves the public interest. Richard Cook has presented the ideas that are likely to shape the national debate on monetary reform for years to come. They are certainly worth our consideration. It’s a great read.

Murdered Mexican General a Victim – But of What? by Richard C. Cook