END_OF_DOCUMENT_TOKEN_TO_BE_REPLACED

subMedia recently held a fundraiser for END:CIV in Vancouver where we premiered the latest clips from the movie. We also beamed in Derrick Jensen via weblink where attendees could ask him questions and have an interactive discussion. The Q & A went so well that we decided to release the video online.

END_OF_DOCUMENT_TOKEN_TO_BE_REPLACED

CARACAS, Venezuela — A U.S.-brokered accord that was supposed to return ousted Honduran President Manuel Zelaya to power has collapsed and his supporters pinned much of the blame Monday on the Obama administration.

Honduras’ Congress has made no plans to vote on whether to enact the agreement following remarks by Assistant Secretary of State Thomas Shannon that seemed to remove U.S. pressure.

END_OF_DOCUMENT_TOKEN_TO_BE_REPLACED

Mike Whitney–November marks the 10th anniversary of the WTO demonstrations in Seattle. Can you explain why you went even though you knew you might be harassed, gassed, beaten or arrested? END_OF_DOCUMENT_TOKEN_TO_BE_REPLACED

I was in the super market the other day and started conversing with the man repairing the ancient dairy case. It turned out that he was in town from Tucson and was actually a native of the city. I grew up there and was born in a town not far outside of Tucson. The man and I were approximately the same age (both being old fucks), and we reminisced about the old days, and deer and quail hunting where there are now track homes. END_OF_DOCUMENT_TOKEN_TO_BE_REPLACED

The United States military is engaged in the conquest of the world. This is not a secret. The strategy has been spelled out repeatedly by official Defense Department policy statements (”full-spectrum dominance”), think-tank studies (PNAC), and official government action by the president and Congress (the biggest war budget in human history).

It’s what led to the Reagan Doctrine which was the practice of picking off one small nation at a time. It’s what led George H.W. Bush to invade Panama and Iraq and the Clinton administration to destroy Yugoslavia. 9/11, whoever did it, followed by the Bush Doctrine of preemptive war, was a convenient springboard for the current phase involving Afghanistan, Iraq, and Pakistan. Next up: Obama’s impending assault on Iran, whether done with U.S. forces or Israeli proxies. The showdown with Russia and China is clearly on the agenda, subject to intense planning by thousands of uniformed and civilian analysts who earn a lot of taxpayer money.

END_OF_DOCUMENT_TOKEN_TO_BE_REPLACED

Once Upon a Time a General…

Once upon a time there was an Afghani general named Abdul Rahim Wardak. He had studied in both US and Egyptian military schools before joining the army in Afghanistan. In the 1980s, a few years after he joined the army, he decided to defect and joined the Mujahideen movement. We don’t know exactly who in the United States gave him the order to defect, because no one is willing to go on record. However, we know very well that due to their fight against the Communist Soviet Union, the Mujahideen were significantly financed, armed, and trained by the CIA, Saudi Arabia, and Pakistan, along with several other not as significant nations. We also know that back then, when we were supporting, financing, training and cheering for the Mujahideen as ‘freedom fighters,’ those labeled today as terrorist evil-doer radicals, Osama Bin Laden and the Taliban, were viewed and treated as our allies and entourage.

END_OF_DOCUMENT_TOKEN_TO_BE_REPLACED

The bill has been described as the biggest overhaul of the country’s healthcare system since the Medicare and Medicaid Act of 1965. Among those who voted no was Ohio Democrat Dennis Kucinich, a leading proponent of a single-payer, Medicare-for-all healthcare system. Reproductive rights took a hit Saturday night when the House also passed an amendment to establish limits on the funding of abortions within the new framework that would be established by the Affordable Health Care for America Act. [includes rush transcript]

END_OF_DOCUMENT_TOKEN_TO_BE_REPLACED

Sean Smith spent a month embedded with the US Army’s 501st Parachute Regiment in June this year. With inadequate vehicles, relations with Afghan security forces at a standstill and the constant threat of IEDs, the soldiers are losing heart for a fight they feel their presence is only prolonging

END_OF_DOCUMENT_TOKEN_TO_BE_REPLACED

A Multimedia Presentation by Anna Baltzer

Sponsor: United for Peace and Justice in Palestine

END_OF_DOCUMENT_TOKEN_TO_BE_REPLACED

Success in Afghanistan is measured in Washington by the ability to create an indigenous army that will battle the Taliban, provide security and stability for Afghan civilians and remain loyal to the puppet government of Hamid Karzai. A similar task eluded the Red Army, although the Soviets spent a decade attempting to pacify the country. It eluded the British a century earlier. And the United States, too, will fail.

American military advisers who work with the Afghan National Army, or ANA, speak of poorly trained and unmotivated Afghan soldiers who have little stomach for military discipline and even less for fighting. They describe many ANA units as being filled with brigands who terrorize local populations, exacting payments and engaging in intimidation, rape and theft. They contend that the ANA is riddled with Taliban sympathizers. And when there are combined American and Afghan operations against the Taliban insurgents, ANA soldiers are fickle and unreliable combatants, the U.S. advisers say.

END_OF_DOCUMENT_TOKEN_TO_BE_REPLACED

[Transcript: Worker Occupations And The Future Of Radical Labor By Noam Chomsky and Diane Krauthamer]

The editor of the Industrial Worker, Diane Krauthamer, spoke to Noam Chomsky at his MIT office in Cambridge, MA, on October 9th, 2009.

Listen to our online radio show, The Authority Smashing! Hour, Weeknights at 8pm Eastern
http://blogtalkradio.com/authoritysma…
and the shows are archived at:
http://authoritysmashers.wordpress.com

END_OF_DOCUMENT_TOKEN_TO_BE_REPLACED 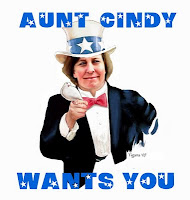 If Not Now, When?
If Not Me, Whom?
— Cindy Sheehan

“A great revolution is never the fault of the people, but of the government.” Johann Wolfgang von Goethe

I know you want to hear that Obama is the Savior of the World…but the only thing Obama is saving is the Empire and the Corporatocracy. The new elitist health care bill is nothing but another handout to corporations and at the same time the Democrats limited a woman’s right to reproductive choice over her own body. About 130 people will die today because he/she did not have access to health care because they are uninsured or grossly under-insured: that’s 47,000 a year. That’s an Empire-imposed holocaust the size of a small city every year.