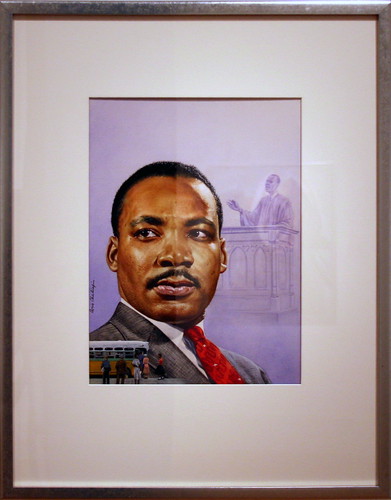 This is the Speech Dr. King gave on April 3, 1968 at Mason Temple in Memphis, TN. It was the night before he was assassinated. It seemed as though he knew his life was coming to an end.

SPECIAL: Dr. Martin Luther King, Jr. in His Own Words

Today is the federal holiday that honors Dr. Martin Luther King. He was born January 15th, 1929. He was assassinated April 4, 1968, at the Lorraine Motel in Memphis, Tennessee. He was just thirty-nine years old. While Dr. King is primarily remembered as a civil rights leader, he also championed the cause of the poor and organized the Poor People’s Campaign to address issues of economic justice. Dr. King was also a fierce critic of US foreign policy and the Vietnam War. We play his “Beyond Vietnam” speech, which he delivered at New York’s Riverside Church on April 4, 1967, as well as his last speech, “I Have Been to the Mountain Top,” that he gave on April 3, 1968, the night before he was assassinated. [includes rush transcript]

via SPECIAL: Dr. Martin Luther King, Jr. in His Own Words

23 thoughts on “Rev. Martin Luther King Jr: I Have Been to the Mountain Top + MLK, in His Own Words”