My astrology teaches me that the planet Pluto, traveling through the sign of Capricorn (2009- 2012), means that the truth must come out. My Catholic background teaches me that “The truth shall set you free.” My agnostic and atheist friends tell me that science only recognizes truths that can be examined and proven. Logic and intuition tell me that without truth we are lost as a civilization.

END_OF_DOCUMENT_TOKEN_TO_BE_REPLACED

An Appeal to the International Community

In this urgent message delivered by ultra snail method of delivery due to restrictions placed upon our communication means (warrantless mass surveillance by our government targeting our telephone, text messages, e-mail, fax, and internet accessibility) we, American citizens, hereby urgently request that the recipients on the other side of the Atlantic and Pacific add our desperately repressed nation to their list of qualified political refugee nations and or raise their existing annual quota for US political refugees. We not only meet but surpass the United Nations 1967 Protocol Relating to the Status of Refugees on the grounds of political opinion and membership and or participation in any particular social group or social activities.

END_OF_DOCUMENT_TOKEN_TO_BE_REPLACED 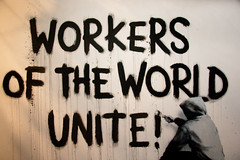 Jen Roesch looks at where ideas like racism and sexism that divide workers come from–and how the working class can overcome this obstacle to unity and solidarity.

ONE OF the most common objections to socialism is the idea that the working class is too alienated, too tied to its narrow material interests and too internally divided to play the revolutionary role that Karl Marx envisioned for it.

END_OF_DOCUMENT_TOKEN_TO_BE_REPLACED

1975. The use of Conspiracy laws in British justice.

END_OF_DOCUMENT_TOKEN_TO_BE_REPLACED

Note: The Preface and Chapters One through Nine can be found here: The 15% Solution

This is the eleventh installment of a project that is likely to extend over a two-year-period from January, 2010. It is the serialization of a book entitled The 15% Solution: A Political History of American Fascism, 2001-2022. Herein you will find Chapter 10. This chapter presents the Second Inaugural Address (2008) of President Jefferson Davis Hague who, with his American Christian Nation Party, the successor to the old GOP, is completing the process of the transformation of the old United States into the “Christian Nation” that the old Republican Religious Right had openly campaigned for for so many years. Under the pseudonym Jonathan Westminster, the book is purportedly published in the year 2048 on the 25th Anniversary of the Restoration of Constitutional Democracy in the Re-United States. END_OF_DOCUMENT_TOKEN_TO_BE_REPLACED

Truthdig editors discuss WikiLeaks with Chris Hedges, the pope with the Rev. Madison Shockley and Fed revelations with Nomi Prins in this radio special for Pacifica’s KPFK.