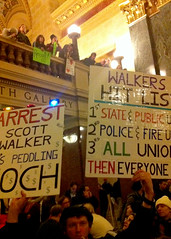 Representative Dennis Kucinich, (D- Ohio) attacks Wisconsin Governor Scott Walker for his trashing of workers’ rights. The Governor signed a bill that eliminated most collective bargaining rights for public employees. This “Speak Up For Workers’ Rights” rally happened after a massive protest at Wisconsin’s state capitol.

MoT posted up this video link that absolutely must get some attention.  There was no transcript, so I created one, and here it is.

We’ve got a lot of great people, who have come to Wisconsin to support you, and I’m very glad to have the opportunity to join them.

This…  this is a moment in American history where we’re called upon to respond with everything that we are, with all that’s in our heart and soul, so that we can reclaim the essence of economic justice before it is somehow it is lost on the corporate scaffold!

We have to fight back!

We fight back for our democracy!

We fight back for our Constitution!

We fight back for due process!

All over America, people are experiencing this ferment that is coming from the events in Wisconsin, and the events in my own State, where in the past week, a bill has moved along, that would strip the right of collective bargaining for Ohio’s public workers that would [boos] …that would put them in harm’s way, should they decide to strike, because if replacement workers would come in and then would set the stage for privatization, and after all isn’t what this is all about?

WE WILL DEMONSTRATE TO WALL STREET!

What we have here today in Wisconsin, is the beginning of a new Civil Rights movement.  Because historically we have to understand, that historically, the right that workers have came apace of the Civil Rights movement, which resulted in breaking slavery, because working people understood, that unless they fought slavery and joined with the abolitionists, that their ability to be able to make a living was going to be compromised.  So what we have now here is the 21st century version of a civil rights movement, where we understand, that a economic democracy is a precondition of a political democracy!

…and so, and so, let this be called the Madison Declaration:

[pounds podium with hand]
[crowd continues with fight back, fight back! chant and applause]

The objectives of corporations are different than those of Government.  They would like us to believe that the corporate ethic is what Government should be about, but we know that corporations are here for one thing, and one thing only, and that is profit.

Government, Government belongs, not to the private sector, but to the public sector, and our responsibility in government is to provide, provide service.  The private sector would like to convert the assets of the public sector for their own use.  That’s why in your own legislation, in the bill, you can see there was an attempt –there’s an attempt in the bill to try to privatize your electric services.  You can see that.

I know about this, I [stutters] fought and beat a privatization of a municipal electrical plant in Cleveland many years ago.  I understand about privatization. I understand that what these corporations want is they want total control over our Government.

Keep the light on!

They want total control of our Government.

In Michigan, we learned the State legislature there is passing legislation that will enable a fiscal manager to come in and literally abolish city governments and school districts!  Now why are they doing this?

Think about it. They’ll do this so that the city governments and school districts can be run for banks and for Wall Street. They’re gonna make sure Wall Street will get it’s pound of flesh.  That Wall Street will be able to handle, through their –these managers, they can break union contracts, they can reduce the city government to mush, city councils and mayors don’t mean anything, school boards don’t mean anything, WE ARE FIGHTING FOR OUR DEMOCRACY HERE!  WE ARE FIGHTING FOR IT, AND WE WILL NOT FAIL TO RECOVER IT!

[points to crowd, who continues chant and clapping, “no more wars”]

There are those that believe that war is inevitable, because they make money from those wars, so that profit becomes inevitable, but we have to establish a new standard, which is what a department of peace is all about.  That we have the capacity to create peace. That we are not just victims of the world we see.

We become victims of the world we see, when we buy into the psychology of war, which a false psychology, which is not something we should accept as the way the world should be.

We have a right to create a world that has plenty.

I also want to say that when we talk about, if we are going to create a context where state governments can survive for the people, then there has to be accountability.  And now you’re showing in Wisconsin, your determined there’s going to be accountability for these State officials for not responding and or doing the bidding of corporations, I want to add this:

There is another thing our country needs to do.  We need to add accountability, and insist on accountability for those that took us into war based on lies.

I wanna, I wanna say this in Wisconsin, because it needs to be said somewhere, but it’s time that those that took us into war, based on lies, they outta be prosecuted once and for all!

We are constantly told we don’t have any money.  Joseph Stiglitz pointed out that, that the war in Iraq would cost at least three trillion, we’re at the half trillion dollar mark, with Afghanistan, but we will have a vote this week, and the vote will be to end the war in Afghanistan, it will be Thursday, House Concurrent Resolution 28, I’m proud to sponsor that, we’re going to get another vote on Afghanistan.

But let me tell you this:  One of the great myths, one of the great myths of our time is that we are told, “well you know we just don’t have the money for these programs, we have money for war, we established that”, but I want to offer this for your consideration, because it’s actually the path out, not just for Wisconsin, but for all the States, who are struggling, with some legitimate budget problems, and we have to look at it this way:

We have to start to examine this debt based economic system, which puts us into believing the only way we can have money is to have debt.  How did we come to believe this?  We came to believe this, because you have the Federal Reserve that was established in 1913, they privatized the money system OK?

We have the fractional reserve system where banks create money out of nothing and then they pyramid the debts and stick the tax payers when they go bust!

We have, we have a government that says, “gee, we don’t have the money to fix our roads, our bridges, our water systems, and sewer system”, I want you to think about this now.

This is a time, in this debate, when transformation is in the air, when evolution is in the air, this is time for us in this debate, to start to look at the monetary system itself, and ask ourselves whether it isn’t time to put the Fed back under the control of the Government, to end the fractional reserve of banking, and to say, “let government spend money and invest in to circulation to rebuild America!  To put millions of people back to work to rebuild our roads, our water systems, our sewer system!”

You may use this for any purpose.  Get the word out people.  This is Progressive! This is the kind of thing that starts movements to actually moving.

General Strike: Because Wisconsin Needs More than a Recall by Billy Wharton