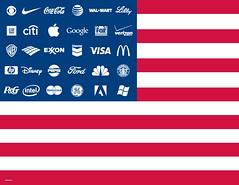 Note: the following Pledge of Allegiance is based on history and fact, not on mythology, delusion, and propaganda.

I Pledge Allegiance to the Flag

Of the Corporate States of Amerika:

One Nation, under Consumerism and Surveillance,

Founded on Genocide, Slavery and Exploitation,

With Liberty and Justice for the Wealthy, Powerful Few,

And Misery and Suffering for the Powerless Many.

TN Protesters Arrested + Matewan (1987; clip) + Photos that set off the protests in Bahrain

Pledge of Allegiance, 2010 by Ed Ciaccio

5 thoughts on “Historically Accurate Pledge of Allegiance By Ed Ciaccio”