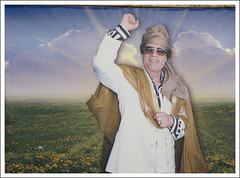 I know I keep hammering on about this but it still hasn’t sunk in with those who profess to be on the left, bemused, or perhaps it’s bewitched, as they are by the concept of ‘humanitarian intervention’. Take the latest bleat from down under:

“I firmly believe the left and progressive forces have made a serious error in viewing and equating Libya with the invasions of Iraq and Afghanistan. Libya is not the same situation; there has been a popular peoples uprising.”— ‘Libya: The left should not oppose call for military intervention‘, Steven Katsineris, Greenleft

The dis-ease of Empire infects all of us, and this from a left that can’t even muster up even the glimmer of an alternative for their own countries, let alone Libya. In fact, spare us any more ‘help’ from the ‘comrades’, I’ve been there, done that thank you very much. I can’t write about Libya, or anywhere else for that matter, without centering or trying to, my focus on what’s closest to me, how the Empire attacks the world. No doubt, Gaddafi is a man out of his time, but that’s not the problem, or the issue, but it sure is an (un)easy cop-out to focus on the nature of Gaddafi rather than the forces arrayed against his country (and its resources). Following the same logic, these children of Empire should surely have supported the invasion of Iraq, after all wasn’t Saddam Hussein a monster?

How far we’ve travelled to end up back before we started.

Elsewhere, this time on Dissident Voice, a slightly different note but in the same key is struck:

“Opposition to intervention on behalf of the Libyan rebellion has been voiced from three perspectives:

Isolationism: it is an unnecessary national burden in possible blood and certainly treasure, with a risk of escalating into a political military quagmire;

Pan Africanism: it would undermine Pan Africanism if Muammar Gaddafi were to lose control of Libya’s wealth (which funds mercenaries from Sahelian countries, and foreign black political groups) and political power (to compel adherence to Pan African ideals by the largely Berber and Arab native Libyan population);

Anti-imperialism: NATO action in Libya is just an excuse to mount a Washington-consensus imperialist assault on an oil-rich nation that for over forty years has opposed such imperialism. — ‘Libya 2011: The Human Right to Political Freedom‘, By Manuel Garcia, Dissident Voice, 3 May, 2011

I’m not sure who he’s talking about here as the first option sounds very much like its focus is the US, but no matter. As to the second one, this is outrageous! A classic piece of Great Power chauvinism in the assumptions it makes about what Pan-Africanism is, but no matter. And the third, well I think it would be more accurate to say that Libya has done its best to accommodate the Empire’s desires and and steer as independent a course as is possible in a world controlled by big capital, but no matter. And never mind that this laying down of the law on what the meanings of these three tags are means the writer has proscribed what the debate is about, but no matter… It’s how the writer answers his own posits that makes interesting, if depressing, reading. To the first of his ‘perspectives’, he says,

“Isolationism is convenient selfishness and very often wise policy. In this case it is also a vote in favor of Muammar Gaddafi.”

Excuse me, but it’s no such thing! Clearly Garcia’s definition of the word ‘isolationism’ is very different from mine. What he is saying here (and I’m assuming he is referring to US citizens, well at least us citizens of Empire) is that citizens shouldn’t be ‘isolationists’ by opposing US intervention as this per se supports Gaddafi! The nerve of the fellow. To cap it off, he brands anyone on the left who opposes the Empire’s invasion of Libya, as ‘Stalinist’, with all its awful connotations. This is how the ‘reds’ red-bait one another:

“The other two objections arise from doctrinal thinking on world affairs. Despite their merits, no worthy international goals can justify the sacrifice of a nation’s freedom to a dictatorship. One has to wonder about the coldness of certain opponents of support for the Libyan revolt, who are “merciless toward the failings of the democracies but ready to tolerate the worst crimes as long as they are committed in the name of the proper doctrines,” as Raymond Aron wrote in 1955 about the French intelligentsia’s bewitchment by Stalinism.”

The point is, that both essays share one thing in common: they are both the product of the imperial mindset, one that can only see the world as a sub-set of their own myopic, Empire-proscribed vision. Both are passionate about ‘democracy’ but forget to mention that it’s ‘democracies’ that are blowing up people, wiping out entire cultures!

For any of you familiar with Roman history we are now firmly in Caligula territory, ‘taking out’ whomever we please, age, sex, location or ‘guilt’, immaterial. Faithfully played to us citizens of Empire to the sounds of cheers and flags waving as we celebrated the death of a (long dead?) Osama bin Laden, or was that the royal wedding? I’m confused, the two events have fused together, media-wise?

And buried at sea? Gimme a break! So what, they just bagged up the remains, loaded it into a helicopter and dropped it in the nearest ocean? If you believe this then I fear you really are losing touch with reality. This is what the BBC reports the US told it:

Mr Carney said the body was prepared for burial “in conformance with Islamic precepts and practice”, then placed in a weighted bag and dropped into the water from the vessel’s deck. Officials said this was to avoid his grave becoming a shrine. – ‘Bin Laden ‘was shot unarmed‘ – US”, BBC Website, 3 May 2011

It’s pure Roman gladiator stuff, dished up courtesy the corporate/state media hegemon and forgotten a couple of weeks later, to take up its position in our corporately created collective memory, that place where the illusion of bin Laden was already firmly embedded. After all, who gives a shit whether Osama lives or dies? Not many and I bet a whole lot more people would rather he be alive today than dead (again).

A testament to a sorry state of affairs that the best we’ve got to offer as an alleged opponent of the Empire is a man formerly on the payroll of the CIA, but already a wealthy Saudi Arabian businessman and virulent anti-communist t’boot. ‘al-Qu-eda’ indeed…

Then you add in the fact that guy has been hanging out in a gigantic mansion for years, only miles from Pakistan’s capital, right on the main highway would you believe, yet all those drones, satellites and local ‘assets’ didn’t figure out where he was ‘hiding’? It stretches my credulity to the breaking point but not, apparently the media’s:

“Reports of the operation to find al-Qaeda leader Osama Bin Laden paint a picture of high tension, with White House officials watching the operation unfold on a live video feed.

“At the climax, at the end of a 40-minute firefight, one of the soldiers uttered the words: “Geronimo EKIA” – meaning a man visually identified by a code word for Bin Laden had been killed in action, officials said.— (ibid)

Regardless as to whether Osama really did get ‘taken out’ this blasé approach to the indiscriminate taking of an (unarmed) human life is how raw, unrestrained power operates! Obama, cultured, educated, informed blah-blah, sat and watched in air-conditioned luxury whilst his capos blew up men, women and children with the press of a button. This is what sections of the left have ended up defending and joining all those hypocritical ‘liberal’ voices with their talk of ‘human rights’ and ‘democracy’.

Ultimately, as a human being I have to oppose the Empire and if that means ‘defending’ the likes of Gaddafi from these murdering predators then so be it.

Libya: Terrorists Are Us? by Felicity Arbuthnot

Iraq and Libya and “humanitarian intervention” by William Blum

Osama Bin Laden: unasked and unanswered questions about the claims of his killing by the US military by Fazal Rahman, Ph.D.

Will Bin Laden’s Burial at Sea Wash? Or will it Float? by Sibel Edmonds

17 thoughts on “The Imperial Mindset by William Bowles”