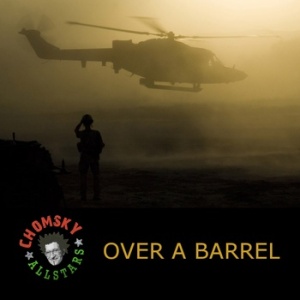 Sent to DS from Chomsky Allstars

Released on Memorial Day 2011, ‘Over A Barrel’ tells the tale of a serving soldier overwhelmed by Afghan combat fatigue. Starring James Young, the track features a breathtaking sax solo from Lord Nelson and is dedicated to the late Gil Scott-Heron.

Chomsky Allstars: Over A Barrel

On May 30th – Memorial Day in North America – Chomsky Allstars releases ‘Over A Barrel’.  Inspired by the plight of Bradley Manning, the song tells the heart-rending tale of a soldier overwhelmed by Afghan combat fatigue, and is dedicated to the late Gil Scott-Heron.

The band will also be playing the following acoustic dates:

Steve Kohn: Bradley Manning and the Travesty of Justice, interviewed by Peter B. Collins and Sibel Edmonds

3 thoughts on “Chomsky Allstars: Over A Barrel”