In a very wordy, hollow words that is, public response, Danielle Brian of Project on Government Oversight (POGO) not only adamantly declines to rescind Obama’s Transparency Award given to him in secrecy, but she actually praises the President as one who has achieved more openness than any other US president, thus deserving of an award given to him in a secret ceremony. Further, Ms. Brian considers this petition and signatories’ efforts a waste of time and a distraction. Here are a few excerpts from POGO’s public response to the petition and all signatories:

END_OF_DOCUMENT_TOKEN_TO_BE_REPLACED

Today, U.S. Sens. Al Franken (D-Minn.), chairman of the Judiciary Subcommittee on Privacy, Technology and the Law, and Richard Blumenthal (D-Conn.) introduced legislation that would require companies like Apple and Google as well as app developers to receive express consent from users of mobile devices like smartphones and tablets before sharing information about those users’ location with third parties. The bill, called the Location Privacy Protection Act, would close current loopholes in federal law to ensure that consumers know what location information is being collected about them and allow them to decide if they want to share it.

END_OF_DOCUMENT_TOKEN_TO_BE_REPLACED

Congressmen Dennis Kucinich (D-OH) and Walter Jones (R-NC) today led a bipartisan group of 10 Members of Congress to file a suit in federal court against President Barack Obama to challenge the commitment of the United States to war in Libya absent the required constitutional legal authority.

END_OF_DOCUMENT_TOKEN_TO_BE_REPLACED 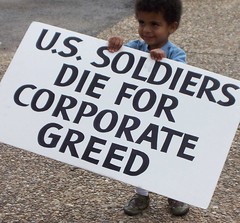 END_OF_DOCUMENT_TOKEN_TO_BE_REPLACED

Peace from Afghanistan, specially to those with the Caravan of Solace far-away in Mexico, who strengthen us with their poetic struggle.

From Afghanistan, we need you to know: Walking together is not a weakness. It is our everything.