The UN Security Council is examining France and Britain’s draft resolution, which condemns the ongoing violence in Syria. Russia and China said they would oppose any toughly-worded documents or hasty action.

END_OF_DOCUMENT_TOKEN_TO_BE_REPLACED

This country is in a mess right now. You can blame it on Clinton, Bush or Obama, but the reality is that it’s more like all three, along with most of the people that they brought into their administrations. It also was not only those that worked for and with the executive branch,  included were Congressmen, Senators, and lobbyists, along with just about anyone else that has had any influence in Washington for the last twenty years.

END_OF_DOCUMENT_TOKEN_TO_BE_REPLACED 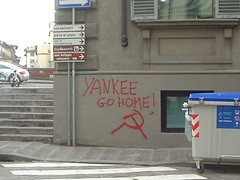 END_OF_DOCUMENT_TOKEN_TO_BE_REPLACED

WASHINGTON, Jun 23, 2011 (IPS) – President Barack Obama’s speech announcing that the 33,000 “surge” troops in Afghanistan will be withdrawn by “summer” 2012 indicates that he has given priority to the interests of the military and the Pentagon over concerns by key officials in his administration over the impact of the war’s costs on domestic socioeconomic needs.

END_OF_DOCUMENT_TOKEN_TO_BE_REPLACED

Office of the Press Secretary
For Immediate Release
June 22, 2011

Remarks by the President on the Way Forward in Afghanistan

THE PRESIDENT:  Good evening.  Nearly 10 years ago, America suffered the worst attack on our shores since Pearl Harbor.  This mass murder was planned by Osama bin Laden and his al Qaeda network in Afghanistan (bin Laden NEVER accepted responsibility for this terrorism, in contrast to his other acts of terrorism.  END_OF_DOCUMENT_TOKEN_TO_BE_REPLACED

END_OF_DOCUMENT_TOKEN_TO_BE_REPLACED

Gary Null and Chris Hedges fascinating look inside this sad subject and more.