By proposing cuts in programs like Social Security, Obama is emboldening the right.

TURNS OUT the president many expected to revive the New Deal is out to bury it instead.

Where did all the jobs go? Small and medium-sized businesses are the major source of new job creation, and they are not hiring. Startup businesses, which contribute a fifth of the nation’s new jobs, often can’t even get off the ground. Why?

END_OF_DOCUMENT_TOKEN_TO_BE_REPLACED

The U.S., along with more than 30 other nations, has decided to recognize Libya’s rebels as the legitimate government of the country. The Libyan Contact Group, convening in Turkey, has also urged Colonel Gaddafi to give up power. Dr. Franklin Lamb – a director of an organisation called Americans Concerned for Middle East Peace – says it’s just another dangerous case of the U.S. misjudging an ally.

END_OF_DOCUMENT_TOKEN_TO_BE_REPLACED

Part I: The Investigation

The gospel of Luke gives us one of the most detailed accounts of the life of Christ. It presents a unique perspective on Jesus and those surrounding Him during His time on earth and expresses an unusual sensitivity to the weak and poor. But who was the writer of this book, this man called Luke—a man attributed as a physician, evangelist, and traveler? Come with author and musician Michael Card as he explores the person of Luke and the historical and social context in which Luke wrote his carefully researched account of Jesus the Christ. Join us for “That You May Be Certain: The Gospel of Luke” on this Day of Discovery.

END_OF_DOCUMENT_TOKEN_TO_BE_REPLACED 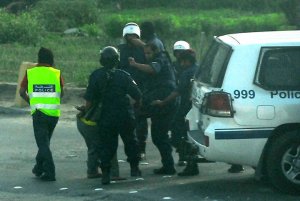 Hamid Dabashi: The Cold War delayed the democratic movement in the Arab world, but it will not be stopped now