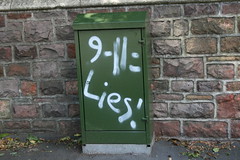 The commemorative ceremonies that are planned for the 10th anniversary of the 9/11 massacre are those of pathos for the victims and their families, of praise for both the pursuit of the supporters of the attackers and the performance of first responders and our soldiers abroad.

Flags and martial music will punctuate the combined atmosphere of sorrow and aggressive defiance to those terrorists who would threaten us. These events will be moments of respectful silence and some expressions of rage and ferocity.

But many Americans might also want to pause to recognize – or unlearn – those reactions and overreactions to 9/11 that have harmed our country. How, in this forward-looking manner, can we respect the day of 9/11?

Here are some suggestions:

1. Do not exaggerate our adversaries’ strength in order to produce a climate of hysteria that results in repression of civil liberties, embodied in the overwrought USA Patriot Act, and immense long-term damage to our economy. Consider the massive diversion of trillions of dollars from domestic civilian needs because of the huge expansion and misspending in military and security budgets.

2. Do not allow our leaders to lie and exaggerate as when they told us there were funded, suicidal and hateful al-Qaeda cells all over our country. They were never here. Actually, the wholesale invasions of Iraq and Afghanistan became recruiting grounds for more al-Qaeda branches there and in other countries – a fact acknowledged by both then-Army Chief of Staff George Casey and then-CIA Director Porter Goss.

3. Do not create a climate of fear or monopolize a partisan definition of patriotism in order to silence dissent from other political parties, the citizenry or the unfairly arrested or harassed.

4. Do not tolerate presidents who violate our Constitution and start wars without congressional deliberation and a declaration of war (article 1, section 8, clause 11). Do not let them disobey federal statutes and international treaties in pursuing unlawful, misdirected quicksand wars, as in Iraq, that produce deaths, destruction and debts that undermine our country’s national interests.

5. Do not have Congress write a blank check, outside the normal Appropriations Committee hearing process, for the huge budgetary demands from the executive branch for funding of the Iraq, Afghan-Pakistan and other undeclared wars.

6. Do not allow the executive branch to engage in unconstitutional and illegal recurrent practices such as wiretapping and other methods of surveillance of Americans without judicial approval, in addition to arrests without charges, indefinite imprisonment, torture and denial of habeas corpus and other due process rights established by our Founding Fathers. Congress has passed no reforms to check the continuing exercise of unchecked dictatorial presidential power.

7. Do not let the government hide the horrors of war from the people by prohibiting photographs of U.S. casualties; operating cruel, secret prisons; harassing reporters; and refusing to count civilian casualties in Iraq, Afghanistan and Pakistan. There is too much intimidation of returning soldiers – so many harmed for life – from telling the people what they experienced and think about these wars and their heavy outsourcing to profiteering corporations.

8. Do not allow leaders to violate American principles with torture or other war crimes prohibited by the Geneva Conventions. Nor should top military brass or members of the executive branch be above our laws and escape accountability.

9. Do not allow your Congress to abdicate or transfer its own constitutional authorities to the president. We the people have not exercised our civic duties enough to make our representatives in Congress fulfill their obligations under the Constitution to decide whether we go to war and act as a watchdog of the president’s conduct. The Libyan war was decided and funded by President Obama without congressional approval.

10. Call out those in the news media who become a mouthpiece of the president and his departments involved in these hostilities. What more is the military really doing in Libya, Somali and Yemen as compared with the official line? Under what legal authority?

In addition, demand that news media outlets seek the inconvenient facts, wherever they might lead, unlike the pre-Iraq invasion period.

The celebrated American theologian-philosopher Reinhold Niebuhr aptly wrote decades ago that “to the end of history, social orders will probably destroy themselves in the effort to prove that they are indestructible.”

All empires eventually eat away at their own and devour themselves.

Ralph Nader is a consumer advocate, lawyer and author of Only the Super-Rich Can Save Us. He is encouraging people around the country to gather in their own towns or cities on Sept. 10 to discuss ways to avoid overreactions to threats.

Ralph Nader on 9/11: The Empire’s Overkill

With 9/11 No Need for “Seven Days in May” by Philip A. Farruggio