Updated: added 2 more videos and an article by Ralph Nader. 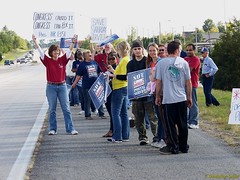 Part of the national day of action to defend the Postal Service from privatizers. Rally in Bridgeport CT Sept. 26, 2011. Charles Page speaks after march by several score postal workers and supporters.

This is About Saving the Postal Service

The afternoon march went to a postal workers rally instead of wall st.

Went to the rally in my town and took some photos.

Everyday we will do our best to bring you a daily recap of the revolution going on in New York City’s financial district. Be on the look out for OCUPPY TVNY coming soon…

The Postal Service is said to be bankrupt, Cenk Uygur gives you the truth. How did the Republicans screw the Post Office?

Mr. Nader identified several drains on the U.S. Postal Service’s financial resources, including a Congressional mandate that the USPS prefund its future retiree health benefits for the next 75 years by 2016 and $82 billion in overpayments that the USPS has made to federal pension systems which have yet to be refunded.

Mr. Nader points out that the $103.7 billion prefunding mandate is something that, “no other government or private corporation is required to do and is an incredibly unreasonable burden.” He continues by revealing that without this onerous prepayment provision, “the USPS would not have a net deficiency of nearly $20 billion, but instead be in the black by at least $1.5 billion.”

Mr. Nader ended by calling on Congress to take action that would have a minimal impact on the patrons of the USPS and prevent further post office closings, deterioration of service, or job cuts.

Click here for a full copy of the letter.

Chris Hedges: Occupy Wall Street Interview – We have a moral imperative to fight for life