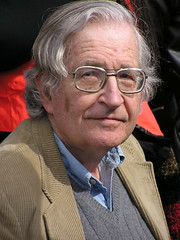 The Edward Said Memorial Lecutre organisers, the University of Adelaide and the Australian Friends of Palestine Association (AFOPA), celebrate Chomsky’s recognition as a recipient of the 2011 Sydney Peace Prize.

AFOPA is also honoured to present this unique event to our supporters, and hoped you enjoyed a spectacular evening with Prof. Chomsky.

Edward Wadie Said was a Palestinian-American literary theorist and one of the most articulate and visible advocates of the Palestinian cause. He taught English and Comparative Literature at Columbia University. Before his death in 2003, Professor Said was seen as one of the leading literary critics of the 20th century, and described by many as an ‘Intellectual Superstar’ in the United States.

Is It Immoral to Vote for Obama? by Mike Whitney