“But remember, this power of the people on top depends on the obedience of the people below. When people stop obeying, they have no power.” — Howard Zinn

END_OF_DOCUMENT_TOKEN_TO_BE_REPLACED 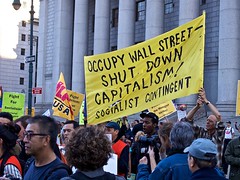 The historical circumstances created by the implosion of contemporary capitalism requires the radical left, in the North as well as the South, to be bold in formulating its political alternative to the existing system. The purpose of this paper is to show why audacity is required and what it means.

END_OF_DOCUMENT_TOKEN_TO_BE_REPLACED

Is Iran the new Japan – 70 years after the Pearl Harbour incident that led to a US declaration of war and an unspeakable nuclear nightmare?

Two concurrent articles on Global Research deserve close reading because taken together they suggest that history is in danger of repeating itself, with even greater catastrophic consequences.

END_OF_DOCUMENT_TOKEN_TO_BE_REPLACED

by Sean Fenley
Guest Writer
Dandelion Salad
The Anything and Everything
December 6, 2011

“It’s amazing how much the Internet has changed our lives. People get emails that make accusations without foundation and they are circulated around the country within seconds and suddenly become topics of conversations around water coolers or in lunchrooms.” – Tim Russert

END_OF_DOCUMENT_TOKEN_TO_BE_REPLACED

I found that the border security push has injected new life into the war on drugs by reconfiguring those failed policies as vital components of national security.  Immigration  control, too, has been swallowed by the security paradigm.  Instead of reforming the economic incentives that make illegal immigration inevitable, the United States has been stuffing non-threatening people into for-profit prisons.  Counter-terrorism, the ostensible purpose of these undertakings, is an excuse for sheriffs to absorb federal subsidies.  And the lack of a coherent border policy provides a vacuum in which reactionary populism and nationalism have flourished at the local, state and federal levels.

END_OF_DOCUMENT_TOKEN_TO_BE_REPLACED

The battered national consensus behind a national universal postal service–conceived by Benjamin Franklin–is heading for a free fall due to bad management, corporate barracudas and a bevy of editors and reporters enamored with the supremacy of the Internet which makes up their world.

Postmaster General Patrick Donahoe is pursuing a strategy of cutting or delaying services while increasing prices. Usually that is a sure prescription for continuing decline. For Mr. Donahoe, the drop in first class mail has left the Post Office with over-capacity. END_OF_DOCUMENT_TOKEN_TO_BE_REPLACED

Eurozone leaders scramble for a solution to the European debt crisis, with Timothy Geithner joining the party now, and as Obama makes his rounds to small towns in the US asphyxiated with debt. S&P issues downgrade warnings for Europe, as the technocratic governments of Greece and Italy hope that unelected unity governments can help ward off the attack of bondholders unwilling to continue funding their nation’s debt at sustainable prices. Could this be why the CEO of Deutsche bank received a parcel bomb in the mail today from none other than the European Central Bank?

END_OF_DOCUMENT_TOKEN_TO_BE_REPLACED

Delegates at the UN Climate Summit in South African port city of Durban have finally reached a deal that aims to extend the 1997 Kyoto Protocol by five more years and launch talks towards a successor treaty.

The new treaty will have binding agreement for developed and developing nations to curb their carbon emissions, and it came with heavy compromises.

Negotiations went on for extra two days to try to get the world’s biggest polluters to commit to a plan to cut carbon emissions.

Al Jazeera’s Jonah Hull reports from the venue of the conference.

END_OF_DOCUMENT_TOKEN_TO_BE_REPLACED

Michael Parenti speaks at the University of Guelph, November 2 2011.

END_OF_DOCUMENT_TOKEN_TO_BE_REPLACED The diminutive Gulf totalitarian monarchy of Qatar, has been making quite a name for itself of late. It was one of the only Arab countries to provide air support in Libya, its customs officials — seemingly unprovoked — recently attacked a Russian ambassador, it cajoled the Arab League into voting for sanctions against Syria, and it plays host to Al Jazeera which has; increasingly, looked more and more, like a mouthpiece for the GCC (Gulf Cooperation Council) and the West. END_OF_DOCUMENT_TOKEN_TO_BE_REPLACED END_OF_DOCUMENT_TOKEN_TO_BE_REPLACED

The revelation that a US unmanned drone aircraft downed in eastern Iran was on a CIA secret surveillance operation raises troubling questions about the immediacy of Washington’s war plans on the Islamic Republic.

Initial reports of the lost drone at the weekend quoted US military officials claiming that the aircraft had strayed into Iranian territory while on a routine manoeuvre over Afghanistan as part of NATO’s occupation in that country.

END_OF_DOCUMENT_TOKEN_TO_BE_REPLACED

U.S not in a position to criticize Russian elections – expert
John Robles

Rozoff worked against the Chicago political machine for 25 years, 1976-2000, including as a ward-wide voter registration coordinator, founder and leader of an independent ward organization, congressional district coordinator for Mayor Harold Washington’s 1987 reelection bid, campaign manager in two state representative and an aldermanic election, and third party candidate for state office.

END_OF_DOCUMENT_TOKEN_TO_BE_REPLACED

You’ve heard of Wikileaks? Well, this document comes from an old Richard Nixon playbook called “Trickileaks.” I received it by a route that I cannot reveal, and indeed I cannot attest fully to its veracity. But it sure sounds like it might be genuine, don’t you think? On the other hand, it is awfully conversational in a way, which does make one doubt its provenance. Maybe it’s just an agent provocateur from the Left making up something about agents provocateurs from the Right. But be that as it may ….

END_OF_DOCUMENT_TOKEN_TO_BE_REPLACED

The first constitutional amendment ever proposed by Sanders during his two decades in Congress would reverse the narrow 5-to-4 ruling in Citizens United vs. the Federal Elections Commission. In that controversial decision almost two years ago, justices gave corporations the same First Amendment free-speech rights as people.