Top Western appointments were allegedly aimed at improving human rights, but the real effect is to crush pro-democracy protests

Two former police chiefs from the US and Britain have brought discernible Western “expertise” to the Bahraini force only weeks following their appointments – a surge in repression and state terrorism.

END_OF_DOCUMENT_TOKEN_TO_BE_REPLACED 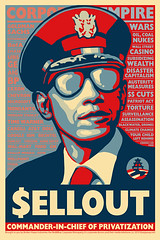 One of the first promises made by President Obama when he first came to power back in 2008 was to close the controversial Guantanamo Bay detention center. Four years later it is still operational. ­The former chief prosecutor of the Gitmo military commissions, Colonel Morris Davis, who was thrilled when Obama took office, told RT of his huge disappointment in the US president.