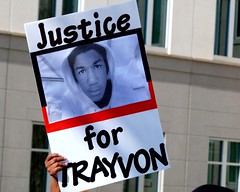 In this video, Sybrina Fulton and Tracy Martin, the parents of Trayvon Martin, speak to the World Socialist Web Site about their son’s death and legacy.

Parents of Trayvon Martin speak to the WSWS

The brutal shooting of 17-year-old Trayvon Martin in Sanford, Florida has generated outrage within wide layers of the population in the US. Demonstrations have taken place in dozens of cities, and the incident has become a means for thousands to express their protest against many aspects of American life.

Meanwhile, Florida authorities have seen to it that material aimed at discrediting Martin in the eyes of the public has been leaked to the media. New facts have also emerged about the family background of the gunman in the episode, 28-year-old neighborhood watch captain George Zimmerman, which shed possible light on the refusal of the authorities to proceed against him.

via More troubling facts emerge in the Trayvon Martin shooting

Democratic Rep. Bobby Rush of Illinois was reprimanded Wednesday for wearing a “hoodie” on the House floor to protest the shooting of unarmed African-American teenager Trayvon Martin in Florida last month. He defends his action today, due to losing son to gun violence.

Congressman Bobby Rush Responds To Being Kicked Off House Floor

6 thoughts on “Sybrina Fulton and Tracy Martin: Trayvon was sacrificed to expose injustice”