An open letter from BDS Italy

Sign the international petition calling on the Red Hot Chili Peppers to cancel their concert in Israel!

After learning of your planned concert in Tel Aviv, we felt compelled to add our voices to the international chorus of calls to cancel that gig. As a band with a conscience, we can’t see you performing in a privileged bubble, surrounded by millions of Palestinians forced to live under Israeli oppression, apartheid and occupation.

END_OF_DOCUMENT_TOKEN_TO_BE_REPLACED

It is an ironic twist of history that Greece, the cradle of Western culture, today, 2500 years after the acme of Hellenic glory, appears on the stage of history in the best of cases as victim, and in the worst, as the symbol of the threat to the collapse of the West European society.

SYRIZA, an acronym signifying “Coalition of the Radical Left”, is favored to win upcoming re-elections following the inconclusive elections held last May 6. Today’s ungovernable and crisis-ridden Greece is shaking the foundation of the European Union. END_OF_DOCUMENT_TOKEN_TO_BE_REPLACED 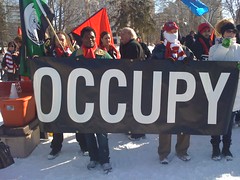 “Scott Noble’s film Rise Like Lions takes the people, actions, and words from the camps and streets of Occupy Wall Street and provides a radical, compelling and inspiring account of what the movement is about. Watch it. Share it. Do it!” -Ron Jacobs, Journalist, Author The Co-Conspirator’s Tale

END_OF_DOCUMENT_TOKEN_TO_BE_REPLACED

NATO’s alleged “concerns” over Syria and its anticipated military intervention in that country seem to multiply and interchange like an alchemist’s brew. From human rights and democratic reforms, to the latest alleged concern of a takeover in Syria by Al Qaeda militants and the theft of chemical weapons of mass destruction.

END_OF_DOCUMENT_TOKEN_TO_BE_REPLACED END_OF_DOCUMENT_TOKEN_TO_BE_REPLACED

According to both the Mayan and Hindu calendars, 2012 (or something very close) marks the transition from an age of darkness, violence and greed to one of enlightenment, justice, and peace.  It’s hard to see that change just yet in the events relayed in the major media, but a shift does seem to be happening behind the scenes; and this is particularly true in the once-boring world of banking.

END_OF_DOCUMENT_TOKEN_TO_BE_REPLACED

WASHINGTON, May 25, 2012 (IPS) – Negotiations between Iran and the United States and other members of the P5+1 group in Baghdad ended in fundamental disagreement Thursday over the position of the P5+1 offering no relief from sanctions against Iran.

END_OF_DOCUMENT_TOKEN_TO_BE_REPLACED

“A gripping, deeply informative account of the plunder, hypocrisy, and mass violence of plutocracy and empire; insightful, historically grounded and highly relevant to the events of today.” – Michael Parenti, Historian, Author The Face of Imperialism [at 1:24:00 in the 1st part]