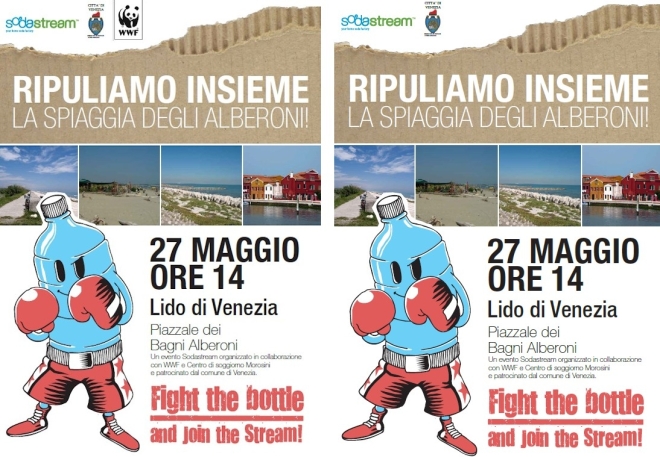 “Join the Stream”: Sodastream’s phony commitment to the environment and real violations of international law

On May 27, the City of Venice, Italy sponsored “Join the Stream”, a promotional event including the cleanup of the Alberoni beach. The event was organized by Sodastream, an Israeli company producing home carbonation devices, as part of an extensive advertising campaign that includes a series of similar events in several Italian cities.

We are stunned to see the City of Venice involved in a shrewd marketing ploy aimed at creating an image of Sodastream as a company committed to environmental sustainability. In fact, behind this facade of a socially responsible business, Sodastream hides an ugly truth: its main manufacturing facility is in the occupied Palestinian territories in the illegal Israeli settlement of Ma’aleh Adumim. Sodastream is thus an accomplice of the Israeli occupation and profits from the systematic violation of international law and basic human rights of the Palestinian people. [1]

Sodastream’s marketing campaign in Italy, with an investment of Euro 3 million for 2012, [2] seeks to leverage this image of an “ecological company,” organizing initiatives to involve individuals and organizations who, in good faith, think they are simply participating in activities in favor of the environment. In some cases, environmental organizations have been involved without their knowledge. In promoting “Join the Stream” in Venice, Sodastream used the WWF logo without the organization’s permission, leading the President of the WWF reserve Dune degli Alberoni to immediately send a formal complaint. In addition, in February of this year, Legambiente, Italy’s largest environmental organization, was forced to issue a formal notice to Sodastream, including a warning of possible legal action, for the continued use of its logo despite the fact that in 2010 Legambiente canceled a sponsorship contract with Sodastream due to its serious violations of international law.

Unfortunately, in the case of the City of Venice, support for Sodastream goes beyond the sponsorship of publicity events to include direct promotion of Sodastream products. The April newsletter for Veritas, the local public utility, included a discount coupon for the purchase of a Sodastream home carbonation device.[3] This collaboration places the City at risk of being an accomplice of the Israeli military occupation through direct support of a company that produces in an illegal settlement.

We consider this inconsistent with the Charter of the City, Article 2 bis, vowing to “recognize the human right to water, specifically, access to water as a universal, indivisible, inalienable human right, and the status of water as a public common good.” [4] This right is denied to Palestinians under occupation, from whom Israel has expropriated water sources via the construction of the Wall and settlements, and forces Palestinians to purchase water at higher prices from the national Israeli company Mekorot.

With the conviction, which we hope is shared by the City of Venice and Veritas, that a commitment to the environment cannot be separated from respect for human rights, we therefore call on:

We thank Legambiente and WWF for their coherence in refusing to provide an environmental backdrop for Sodastream’s violations. We call on both organizations to issue a public statement so that other associations and public administrations are informed about the facts of Sodastream before entering into contracts with the company.

We also call on the Italian Movement for Water as a Common Good, as well as all citizens in favor of public access to water and human rights more generally, to monitor and take action to prevent local authorities and organizations responsible for water services from engaging in relationships and promoting companies profiting from the Israeli military occupation and violation of international law and human rights of Palestinians.

[1] The international campaign against Sodastream has extensively documented and denounced these violations, promoting a boycott campaign against the Israeli company that is developing from North America to Europe to Oceania. (See: http://www.stopagrexcoitalia.org/news/278-bollicine-occupazione.html; http://tinyurl.com/whoprofits-sodastream).

In Italy, Stop Sodastream, in addition to organizing awareness raising events, also launched an appeal to retailers and promoters of Sodastream products, calling for termination of all relationships with the company, signed by over 1100 people with 30 groups (see: http://www.stopagrexcoitalia.org/iniziative/online/273-sodastream.html). The company talking points were refuted in the well-documented reply from the campaign (see: http://www.stopagrexcoitalia.org/news/comunicati/279-risposta-sodastream.html)

[4] Charter of the City of Venice

To the Red Hot Chili Peppers: You can’t ‘play for a better day’ in Israel

Yves Béhar, Sodastream is not ethical, so it cannot be beautiful!

One thought on ““Join the Stream”: Sodastream´s phony commitment to the environment and real violations of international law”