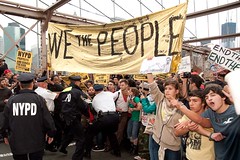 Filmmaker Dennis Trainor Jr. on his new film and the challenges facing the Occupy Movement

Occupy Will Be Back by Chris Hedges

3 thoughts on “American Autumn: an Occudoc (In Other Words: F*ck You, Gordon Gekko!)”