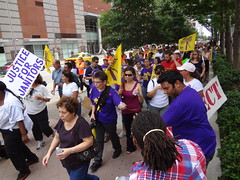 END_OF_DOCUMENT_TOKEN_TO_BE_REPLACED

And so it seems that the student strike in Quebec is slowing down and nearing an end, as the college – CEGEPs – in Quebec have voted to return to class, with roughly 10,000 students having voted to continue the strike, a far reduction from the 175,000 students that were on strike in late April and early May. The strike began in February of 2012 in opposition to a planned 75% increase in the cost of tuition. The students mobilized massive numbers, held mass protests, undertook picket lines at schools, expanded the issue into a wider social movement, and were consistently met with state violence in the form of riot police, pepper spray, tear gas, beatings with batons, being shot with rubber bullets, even being trampled by horses and driven into by police cars. The government enacted Bill 78, assaulting the rights to freely assemble and speak, and put a ‘pause’ on the school semester to end picket actions. END_OF_DOCUMENT_TOKEN_TO_BE_REPLACED

Julian Assange makes his first public appearance in two months, ever since he took refuge in the Ecuadorian embassy in London. The WikiLeaks founder was granted political asylum on Thursday — a decision that ignited a wave of international responses, with the UK and Sweden opposing the verdict and Latin American countries strongly supporting Ecuador’s move. END_OF_DOCUMENT_TOKEN_TO_BE_REPLACED

Julian Assange’s case has raised numerous concerns among journalists and activists who fear being prosecuted for doing their job. RT interviews author and journalist Naomi Wolf, who says the US government is especially tough on those exposing official wrongdoing.

END_OF_DOCUMENT_TOKEN_TO_BE_REPLACED

“Two years ago, Pulitzer Prize winner Chris Hedges and award-winning cartoonist and journalist Joe Sacco set out to take a look at the sacrifice zones, those areas in America that have been offered up for exploitation in the name of profit, progress, and technological advancement. END_OF_DOCUMENT_TOKEN_TO_BE_REPLACED

In the early 20th century the American city of Detroit was a booming industrial powerhouse and world leader in car manufacturing. But since the major car companies closed their factories, more than a million taxpayers have moved out of Detroit, leaving behind more than 100 square kilometers of vacant land, and nearly 40,000 abandoned houses. A group of visionary residents are now sowing the seeds of an urban farming revolution.

END_OF_DOCUMENT_TOKEN_TO_BE_REPLACED

WASHINGTON, Aug 16 2012 (IPS) – Two recent interviews apparently given by Israeli Defence Minister Ehud Barak provide evidence that the new wave of reports in the Israeli press about a possible Israeli attack on Iran is a means by which Prime Minister Benjamin Netanyahu and Barak hope to leverage a U.S. shift toward Israel’s red lines on Iran’s nuclear programme.

END_OF_DOCUMENT_TOKEN_TO_BE_REPLACED

As eight of the fourteen CEGEP preparatory schools have voted to return to class, and thereby end the strike which began in February, Quebec is beginning to witness the fading away of the first phase of the student movement, mobilized by the planned tuition increases, and which expanded into a broader social movement known as the ‘Maple Spring.’ As some students have returned to class, they were met with a heavy police presence, no doubt to ensure ‘order’ during such a “dangerous” situation in which students enter school property. After all, Bill 78, which was passed by Jean Charest’s government back in May (now known as Law 12), made student protests on (or within 50 metres of school property) an illegal act.