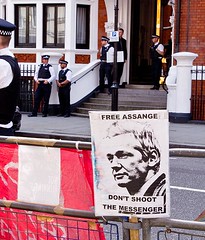 Assange to UN: US is trying to build a ‘regime of secrecy’

Julian Assange addressed permanent representatives to the UN General Assembly at a high-level talk on the legal and ethical legitimacy of diplomatic asylum. READ MORE http://on.rt.com/f3jgtl

I speak to you today as a free man, because despite having been detained for 659 days without charge, I am free in the most basic and important sense. I am free to speak my mind.

This freedom exists because the nation of Ecuador has granted me political asylum and other nations have rallied to support its decision.

It is thanks to the United Nations that I am able to exercise my inalienable right to seek protection from the arbitrary and excessive actions taken by governments against me and the staff and supporters of my organisation. It is because of the absolute prohibition on torture enshrined in customary international law and the UN Convention Against Torture that we stand firmly to denounce torture and war crimes, as an organisation, regardless of who the perpetrators are.

I would like to thank the courtesy afforded to me by the Government of Ecuador in providing me with the space here today speak once again at the UN, in circumstances very different to my intervention in the Universal Periodic Review in Geneva.

Almost two years ago today, I spoke there about our work uncovering the torture and killing of over 100,000 Iraqi citizens.

But today I want to tell you an American story.

I want to tell you the story of a young American soldier in Iraq.

The soldier was born in Cresent Oaklahoma to a Welsh mother and US Navy father. His parents fell in love. His father was stationed at a US military base in Wales.

The soldier showed early promise as a boy, winning top prize at science fairs 3 years in a row.

He believed in the truth, and like all of us, hated hypocrisy.

There, it is alleged, he saw a US military that often did not follow the rule of law, and in fact, engaged in murder and supported political corruption.

It is alleged, it was there, in Baghdad, in 2010 that he gave to WikiLeaks, and to the world, details that exposed the torture of Iraqis, the murder of journalists and the detailed records of over 120,000 civilian killings in Iraq and in Afghanistan. He is also alleged to have given WikiLeaks 251,000 US diplomatic cables, which then went on to help trigger the Arab Spring. This young soldier’s name is Bradley Manning.

Allegedly betrayed by an informer, he was then imprisoned in Baghdad, imprisoned in Kuwait, and imprisoned in Virginia, where he was kept for 9 months in isolation and subject to severe abuse. The UN Special Rapporteur for Torture, Juan Mendez, investigated and formally found against the United States.

Hillary Clinton’s spokesman resigned. Bradley Manning, science fair all-star, soldier and patriot was degraded, abused and psychologically tortured by his own government. He was charged with a death penalty offence. These things happened to him, as the US government tried to break him, to force him to testify against WikiLeaks and me.

As of today Bradley Manning has been detained without trial for 856 days.

The legal maximum in the US military is 120 days.

We should not underestimate the scale of the investigation which has happened into WikiLeaks. I only wish I could say that Bradley Manning was the only victim of the situation. But the assault on WikiLeaks in relation to that matter and others has produced an investigation that Australian diplomats say is without precedent in its scale and nature. That the US government called a “whole of government investigation.” Those government agencies identified so far as a matter of public record having been involved in this investigation include: the Department of Defense, Centcom, the Defence Intelligence Agency, the US Army Criminal Investigation Division, the United States Forces in Iraq, the First Army Division, The US Army Computer Crimes Investigative Unit, the CCIU, the Second Army Cyber-Command. And within those three separate intelligence investigations, the Department of Justice, most significantly, and its US Grand Jury in Alexandria Virginia, the Federal Bureau of Investigation, which now has, according to court testimony early this year produced a file of 42,135 pages into WikiLeaks, of which less than 8000 concern Bradley Manning. The Department of State, the Department of State’s Diplomatic Security Services. In addition we have been investigated by the Office of the Director General of National Intelligence, the ODNI, the Director of National Counterintelligence Executive, the Central Intelligence Agency, the House Oversight Committee, the National Security Staff Interagency Committee, and the PIAB – the President’s Intelligence Advisory Board.

For all Barack Obama’s fine words yesterday, and there were many of them, fine words, it is his administration that boasts on his campaign website of criminalizing more speech that all previous US presidents combined.

I am reminded of the phrase: “the audacity of hope.”

Who can say that the President of the United States is not audacious?

Was it not audacity for the United States government to take credit for the last two years’ avalanche of progress?

Was it not audacious to say, on Tuesday, that the “United States supported the forces of change” in the Arab Spring?

Tunisian history did not begin in December 2010.

And Mohammed Bouazizi did not set himself on fire so that Barack Obama could be reelected.

His death was an emblem of the despair he had to endure under the Ben Ali regime.

The world knew, after reading WikiLeaks publications, that the Ben Ali regime and its government had for long years enjoyed the indifference, if not the support, of the United States – in full knowledge of its excesses and its crimes.

So it must come as a surprise to Tunisians that the United States supported the forces of change in their country.

It must come as a surprise to the Egyptian teenagers who washed American teargas out of their eyes that the US administration supported change in Egypt.

It must come as a surprise to those who heard Hillary Clinton insist that Mubarak’s regime was “stable,” and when it was clear to everyone that it was not, that its hated intelligence chief, Sueilman, who we proved the US knew was a torturer, should take the realm.

It must come as a surprise to all those Egyptians who heard Vice President Joseph Biden declare that Hosni Mubarak was a democrat and that Julian Assange was a high tech terrorist.

It is disrespectful to the dead and incarcerated of the Bahrain uprising to claim that the United States “supported the forces of change.”

This is indeed audacity.

Who can say that it is not audacious that the President – concerned to appear leaderly – looks back on this sea change – the people’s change – and calls it his own?

But we can take heart here too, because it means that the White House has seen that this progress is inevitable.

In this “season of progress” the president has seen which way the wind is blowing.

And he must now pretend that it is his adminstration that made it blow.

Very well. This is better than the alternative – to drift into irrelevance as the world moves on.

We must be clear here.

The United States is not the enemy.

Its government is not uniform. In some cases good people in the United States supported the forces of change. And perhaps Barack Obama personally was one of them.

But in others, and en masse, early on, it actively opposed them.

This is a matter of historical record.

And it is not fair and it is not appropriate for the President to distort that record for political gain, or for the sake of uttering fine words.

And as for the fine words.

They are fine words.

And we commend and agree with these fine words.

We agree when President Obama said yesterday that people can resolve their differences peacefully.

We agree that diplomacy can take the place of war.

And we agree that this is an interdependent world, that all of us have a stake in.

We agree that freedom and self-determination are not merely American or Western values, but universal values.

And we agree with the President when he says that we must speak honestly if we are serious about these ideals.

President Obama spoke out strongly in favour of the freedom of expression.

“Those in power,” he said, “have to resist the temptation to crack down on dissent.”

It is time for President Obama do the right thing, and join the forces of change, not in fine words but in fine deeds.

Julian Assange: The US administration’s war against whistleblowers must end. Bradley Manning must be released.

6 thoughts on “Julian Assange Addresses UN On Human Rights: US Is Trying To Build A ‘Regime Of Secrecy’ + Transcript”