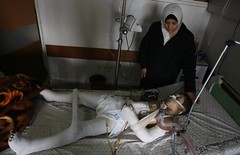 Israel’s holocaust of innocents in Gaza has not sated the blood lust of its Zionist rulers, with the death toll rising to over 110 and the injured numbering more than a thousand – less than six days after the latest murderous offensive began.

Then as now, most of the victims are children, their bloodied bodies pulled out from rubble, piled up in morgues; their innocent eyes in a frozen stare at the moment of horror visited on them in their homes.

How can the world tolerate such barbarity? Well, the majority of the world is not tolerating it. Humanity is horrified and aggrieved by these atrocities. All across the world, civic society and a good many governments are mobilizing, condemning Israel’s crimes against humanity.

But the seeming helplessness of the world to put an abrupt end to the holocaust is down to one simple, irrefutable fact. The perpetrators of such evil are supported by the government and ruling class in Washington. In a secondary support role to mass murder are the despicable governments in London, Paris and Berlin. But the ultimate author of this barbarity is Washington.

The massacre of civilians in Gaza and elsewhere in Palestine could be stopped right now with one phone call from US President Barack Obama. One phone call telling the Israeli criminals-in-office that the USD 3 billion annual lifeline of economic and military aid from American tax-payers is being terminated would bring this killing machine to a halt.

But there will be no such phone call. Because the Israeli killing machine is an integral part of Washington’s criminal hegemony in the Middle East and beyond. Washington’s imperialist exploitation of other nations’ resources is predicated on its terrorist foreign policy that is embodied by the Zionist regime.

The latter criminal entity cannot be dismantled without first and foremost dismantling the terrorism of Washington, which in turn mandates the overthrow of the American empire of global capitalism.

The blood being spilled, splattered in Gaza is a crime of indelible proportions. It is also a sickening sacrifice that bears important truths about our world.

For a start this criminal entity of Israel is exposed once and for all as an abomination of international law and humanitarian justice. Its continual Holocaust invocation as a carte blanche to commit any atrocity at will and with impunity against Palestinian people and many others is a veil of deception that should now be torn asunder. How dare the terrorists in Tel Aviv forge such a badge of impunity.

This criminal, hypocritical regime of Israel has lost all its claims for legitimacy to exist. For too long, the world has tolerated Zionist apartheid under the cynical cover of “peace process” while Palestinians are robbed off their homeland and their basic material means of existence. This latest onslaught is but the final step over a red line to oblivion; a final step in a long march of atrocities and violations.

To hell with Israel. Through its relentless crimes, Israel has forfeited any right to exist. Those who want to live in peace should do so in the historic land of Palestine. A two-state solution is an affront to international norms and justice. The artificial illegal borders of Israel bequeathed by colonialists and expanded by colonizers should be henceforth rejected and, yes, wiped off the map.

The Western government sponsors of this criminal war machine that is the entity of Israel are exposed in the latest holocaust in Gaza. As condemnations ring out around the world in support of the Palestinians, Washington and its Western allies sit idly, shamelessly, on the UN Security Council.

Both Washington and London cannot bring themselves to utter a word of condemnation against the killing of children and civilians in Gaza. Both pointedly uphold the “right to self-defense” by an Israeli regime that is crushing millions of people under a five-year genocidal siege and which has wiped Palestine off the map for more than six decades.

The United States this week blocked a UN Security Council statement condemning Israel’s violence. US ambassador Susan Rice – who is tipped to become the new foreign secretary replacing Hillary Clinton – used the most twisted logic to say no resolution would be permitted which undermines a ceasefire. However, this nauseating display of hypocrisy is a good thing, for it exposes the cynical, corrupt nature of US government and its Western lackeys.

For months, the US and its Western allies have been denouncing Russia and China for blocking a UN Security Council resolution to sanction the Syrian government of Bashar al-Assad. Moscow and China have been lambasted for turning a blind eye to violations in Syria – even though much of the violations in that country have been committed by Western-backed mercenaries. All the while, the Western governments have been trumpeting their concern for human rights and international law.

Yet when a clear case of mass murder and human rights violations is now being witnessed in the concentration camp that is Gaza, those same Western governments are silent on the atrocities and the victims. Indeed, they show themselves as the vocal apologists and material supporters of the killers – consistent with what they are actually doing in Syria, despite their fraudulent claims.

Ironically, some commentators claim that the re-election of America’s terrorist-commander-in-chief Barack Obama was a huge snub to Israel’s storm-trooper commandant Benjamin Netanyahu. The claim that the White House and Pentagon global terrorist complex is somehow beholden to Tel Aviv against its better, moral judgment is a dangerous delusion that is now, thankfully, laid bare by the horror unfolding in Gaza and the American government support of that.

To claim that Washington’s nefarious foreign policy is all down to the machinations of Zionist lobbyists and bankers is to fundamentally fail to understand the root cause of violence as a function of the capitalist imperialist system for which the US is the executive power.

The holocaust in Gaza and the sacrifice of innocents spotlights more Western corruption. The Western-dominated United Nations and its puppet general secretary Ban Ki-Moon – also refusing to condemn Israel or to even visit the suffering victims of Gaza – is an organization that is clearly way past is expiry date. This institution under Western control is a disgrace to the vision of a democratic, mutual world.

Its inability to reflect the majority concerns of the world – from the recent overwhelming call by members to put an end to the illegal US six-decade trade embargo on Cuba, to the latest genocide in Gaza – demonstrates beyond any doubt that this world body in its present form must be abolished and replaced with a forum more closely resembling the Non-Aligned Movement.

The holocaust in Gaza also exposes the moral cowardice and bankruptcy of Western mainstream media. These institutions through their sanitizing banalities and affectations of balance are complicit in covering up crimes against humanity, and by doing so prolonging the genocide committed by Western governments and their Israeli war machine.

Voice of America reports how “Israel and Hamas are slugging it out”. The BBC decries how “civilians in Israel and Gaza need a ceasefire”. Reuters reports: “Israel bombed dozens of suspected militant sites in the Hamas-ruled Gaza Strip… as Palestinians kept up their cross-border rocket fire.” While the New York Times lamented: “Israel and Hamas brushed aside international calls for restraint and escalated their lethal conflict over Gaza.”

Finally, what the Gaza holocaust highlights is the corruption and illegitimacy of Arab leaders. Hezbollah’s secretary general Sayed Hassan Nasrallah has rightly called on the oil-rich Arab rulers to use the world’s number-one commodity as a weapon to demonstrate solidarity with Palestinians and to protest Western-backed Israeli aggression.

But as with so many previous occasions of crimes against humanity on the Palestinians and other Arab people, the venal, corrupt dictators of Saudi Arabia, Qatar and Persian Gulf remain shamefully indolent and silent. They are congenitally on the side of the oppressors. These despots are too busy supplying weapons and funding to mercenaries to kill other Arabs in Syria. So is it any wonder that they are indifferent to the murder of Arab women and children in Gaza?

There will be a day of reckoning for the crimes in Gaza. That day is soon arriving.

Finian Cunningham, is a columnist at Press TV and a Featured Writer on Dandelion Salad. He can be reached at cunninghamfinian@gmail.com.

US Money and Policy Makes Israeli Attack on Gaza Possible

Israel-Palestine – What Is The U.S. National Interest? by Ralph Nader

Gaza Is A Window On Our Coming Dystopia by Chris Hedges