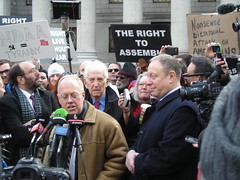 As I head west on Chambers Street toward the Court House I hear a huge roar followed by loud chanting ricocheting off the stone walls of the buildings and I’m elated. This is amazing, I think. There must be hundreds of people protesting the NDAA outside 40 Centre Street. But then I realize the protest is the transit workers’ school bus strike, now in its third week. I stop to take a few photos and give them a thumbs up before continuing along my route.

By the time I reach 40 Centre Street I’ve already missed Hedges, Ellsberg, Drake, Chomsky and the other notables who’ve already entered the Court House. What I find are 25 or so activists milling around and a huge group of photographers standing in a line on the opposite side of the sidewalk watching the proceedings along with several police cars and officers. So much for my dream of a large people’s presence protesting Obama’s signing the NDAA into law on December 31, 2011 as unsuspecting Americans sipped champagne and sang “Auld Lang Syne.” Perhaps Obama figured no one would notice — and most people didn’t — but Chris Hedges did and he filed a lawsuit against Obama and Panetta.

Whenever I mention the NDAA most people give me a quizzical look and ask, “What’s that?” To which I give them the ‘in a nutshell’ answer. The NDAA stands for the National Defense Authorization Act, which has provisions for the government to use the US military against US citizens and can throw us into prison without due process until the end of hostilities, which in our case of permanent war means forever! They then look at me and ask, “Are you making this up?” To which I reply, “Google it.” Let’s be honest: who could make this up? Well, besides some member of the SS.

This is why plaintiffs and supporters in the Hedges v. Obama lawsuit are challenging the controversial indefinite detention provision set forth in Section 1021(b)(2) of the NDAA and were back in court on February 6th. The plaintiffs in the lawsuit, referred to as the Magnificent 7, or Freedom 7, are Pulitzer prize-winning journalist Chris Hedges, whistle-blower Daniel Ellsberg, NDAA Case Coordinator and founder of Revolution Truth Tangerine Bolen, author Noam Chomsky, Icelandic parliamentarian Birgitta Jonsdottir, Occupy London activist Kai Wargalla and journalist and activist Alexa O’Brien. Bruce Afran & Carl Mayer serve as counsel for the plaintiffs.

Back in May US District Judge Katherine Forrest ruled Section 1021 of the NDAA was unconstitutional. Her ruling returned us to the country we were before Obama signed this act into law. Meaning the government cannot strip a US citizen of due process or use the military to arrest US citizens and hold them in a military prison indefinitely. Judge Forrest then granted a permanent injunction on the NDAA provision, which was appealed the next day by the Obama White House. The 2nd Circuit Court of appeals then placed Section 1021 of the NDAA back into effect.

Hedges describes the NDAA as, “The final battle between the restoration of due process and the imposition of a military state.”

“They seek to subjugate us all.” Chris Hedges

The only thing more craven then Obama signing the NDAA into law is the total lack of any coverage by the corporate media, which has proven itself to be nothing more than the propaganda arm of the corporate state. There were no cameras from NBC, ABC, CBS, FOX or CNN in front of the courthouse. The reporters were from Democracy Now!, RT, WBAI and various other independent media outlets. But worse still is the complete denial on the part of the American public that anything out of the ordinary is going on. The willful ignorance of Americans’ is astounding to me. We’ve become a nation of zombies.

Obama is a brand, and I believe he was put into office to do what no Republican could ever get away with. He’s the kinder gentler face of corporate empire. Here we have a president who’s much worse than Bush in so many ways. Obama’s extended the wars, created new wars, extended the Bush tax cuts for the rich, gave additional bail out money to the banks, allowed the health insurance industry to write the healthcare bill, extended the Patriot Act, escalated drone attacks (6 times as many as Bush) and prosecuted twice as many whistle-blowers under the Espionage Act of 1917 as all other presidents combined. Obama has assassinated three US citizens without due process and now wants to carry this draconian power out at home, and to that end signed the NDAA into law and amazingly still finds time to ruminate over his ‘kill list’ on ‘Terror Tuesdays.’

Is the American public willfully ignorant or just ignorant? Or as a friend of mine told me when we were arguing over Mr. O and his policies. “Well, I don’t want to know. I’m happy with my little life and if I know I’ll just be depressed.” Perhaps that’s the same logic the Germans used as Hitler came to power and began systematically stripping away civil liberties and silencing all descent. I used to wonder how the Germans could remain silent with all that transpired, but now see it happening here in the US, and I’m truly amazed and pissed off by our complicity in this corruption.

Glenn Ford refers to Obama as the “more effective evil” and I have to agree with his assessment. I mean give me a break. Don’t listen to what Obama says. Talk is cheap. Look at his actions. It’s not that difficult. Obama’s completely charmed and neutered the African American community. And the hypocritical liberals are so full of crap. They’re a bunch of crybabies who under Bush raised holy hell and now under Obama remain silent sycophants to his reign of terror. These so-called liberals are enabling cowards. Defending their murderer in chief at every turn. The lily-livered, hypocritical liberals lay prostate and impotent at Obama’s feet pleading to be stomped on. They beg for their enslavement. Jesus, are they truly that deaf, dumb and blind?

The corporate takeover of our government and the erosion of our civil liberties continue, and if it’s allowed to continue unabated then we are truly done for. We will be a full-blown corporate police state with no rights and no jobs. We’ll be a penal colony. A third world country filled with serfs and warlords. Hedges affirms, “All these laws are being put through by design.”

The sooner Americans figure out there’s no two-party system, the better. There is only one party and that, my friends, is a corporate party that serves the 1% and the corporations. Our government has been taken over by corporate forces that have no loyalty to any nation, but only to profit and they will exploit all humanity and the planet until both collapse. Because, like Chris Hedges says, “The only word they know is, “More!”

But here’s the rub: we live on a finite planet with finite resources. As corporate forces continue to rape and pillage mother earth we’ll all be fighting for scraps. The so-called elites and the 1% believe their money will save them, and for a time it probably will. But rest assured when there’s no clean water or clean air, and the planet’s completely radioactive from all the nuclear spills, and the oceans are polluted by the oil spills, and only used as a dumping ground for plastic and chemical wastes then no amount of money will save these greedy bastards. They’re going down just like the rest of us. The only difference is they’ll be shocked, as they believe their own hype.

But alas, we have to keep bearing witness to these atrocities even when nobody else does. It’s no time to get discouraged because my dream is one-day the 100th monkey will figure out what’s really going on and then we’ll all be washing our coconuts. Until then one must keep the faith, keep showing up, standing up and speaking truth to power.

On my way home I again pass by the transit workers and this time stop to listen to their grievances. They get it. Our 29 billion dollar mayor is trying to break their union. I encourage them, “Don’t let them do it. Stay strong.”

Throughout history all totalitarian regimes have eventually turned on their own citizens. The violence always comes home to roost but like Gandhi said,

Jill Dalton is a recovering army brat/writer/performer who has appeared in film and television as well as performing her solo plays in New York and around the country. Most recently she can be seen in and consulted for William Hurt on the HBO film, “Too Big To Fail.” Her articles have been published on: Dandelion Salad, RSN, OpEdNews & Progressive Activists Voice. She is currently writing a screenplay. Read Ms. Dalton’s new ebook, Is It Fascism Yet?

Chris Hedges: NDAA: This Is The Final Battle Between The Restoration Of Due Process and The Imposition Of A Military State (updated)

Chris Hedges: NDAA: All These Laws Are Being Put Through By Design

Chris Hedges: They Seek To Subjugate Us All

Chris Hedges: NDAA: All These Laws Are Being Put Through By Design

49 thoughts on “NDAA: Hedges v. Obama: Did The Bill of Rights Die Today? by Jill Dalton”