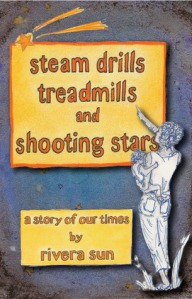 A Book Review of Steam Drills, Treadmills and Shooting Stars

Mark Twain coined the phrase “Gilded Age” in reference to the late 19th century in America. The hidden, “gilded,” corruption of the period was exposed by a special group of writers referred to as Muckrakers. The Muckrakers of the late 19th and early 20th centuries left a lasting mark on the US. Their response to the corruption and abuse in US culture set the pattern for future reform movements in America. It would seem a hundred years later the United States is again experiencing a “gilded age” of corruption at the top levels of business and government, and the country is in need of novelists like Upton Sinclair who brought events to such attention that laws were enacted which changed the course of US history. Sinclair’s novel The Jungle brought government inspection to the meat-packing industry, and forever changed the food Americans put in their mouths, and his novel Boston, about the travesty of the Sacco and Vanzetti trail, had a great deal to do with changes in US criminal jurisprudence which followed.

American Realism in literature from 1960 to 1890 preceded and laid the foundation for the Muckrakers. According to William Harmon and Hugh Holman, “Where romanticists transcend the immediate to find the ideal, and naturalists plumb the actual or superficial to find the scientific laws that control its actions, realists center their attention to a remarkable degree on the immediate, the here and now, the specific action, and the verifiable consequence.” (A Handbook to Literature 428).

In her attractively bound inspirational and hopeful book, Steam Drills, Treadmills and Shooting Stars (Rising Sun Press Works, 2013), Rivera Sun follows in the traditions of American Realism and the Muckrakers.

In the Gilded Age many people were aware of the corruption and knew something was wrong and in need of change, just as today people are aware of the problems of a capitalistic society which values the love of money above all else. People know something is drastically wrong and in dire need of change. The question becomes: how does one one person or a group of people change the behavior of a society and the world?

Ms. Sun sets her novel in West Virginia and across the river into Ohio and follows in the footsteps of American Realism and muckraking literature. This reviewer is reminded of a poem by James Wright in his collection Shall We Gather At The River, where prostitutes in Wheeling, West Virginia go down to the river and into the water. The narrator wonders at what time these women climb back up to the West Virginia side before dawn, because no one would commit suicide to only find beyond death Bridgeport, Ohio.

The improbable heroine of the book is Henrietta Owen, a 24-year-old unemployed single mother of color from Ohio. She moves from Ohio to No Man’s Holler in West Virginia to be near the father of her child falsely imprisoned in West Virginia for a crime he did not commit and given a ten-year sentence. Rural West Virginia is alien to urban-raised Henrietta. Previously she was only dimly aware of mountaintop removal to get at coal used for generating electricity in an unsustainable and extremely polluting way. She is shocked by the horror and damage, and becomes involved with a small group of people fighting hilltop removal and all the ecological and environmental disasters which go with it. This relatively uneducated articulate woman becomes the spokesperson for this small group of activists and gets national media coverage.

Jack Dalton, another improbable, is the hero of the book. He a New Yorker, Harvard Law School graduate and twenty-five veteran of Standard Coal, a major player in hilltop removal. He has a long history of fighting environmental activists and union organizers for the company, and has mastered the art of legal minutia and dirty tricks. With a wife, eleven-year-old daughter, a mortgage, car payments, private school tuition, and another child on the way, he is totally caught in the upper “middle class American lifestyle”. He doesn’t need or want to deal with Henriette Owen and her “group of radicals.” He doesn’t count on the legendary folk hero, John Henry, entering into his life.

The rest of the fresh and cliche-free writing deals with how Jack Dalton and Henriette Own work their problems out to the benefit of everyone, and in so doing provide a general road map as to how a single person like Gandhi, or Nelson Mandela or a small group of people like the Sierra Club or Greenpeace can have a huge impact on society and the world.

This is a must read book for anyone interested in helping others and making an effort to improve the lives of everyone. The book is not without its problems. It starts slow, and it takes a while to get into, and it would benefit from starting in medias res as Upton Sinclair did in his best and most famous novel, The Jungle. The title is overly long and and only two parts of it fit the book. Jack Dalton with the recurrent John Henry theme certainly warrants Steam Drills as does Henrietta Owen earn her shooting stars moniker. The short description of a treadmill in the book certainly does not mean that event should be included in the title. More than likely Ms. Sun had a lot more written about treadmills and edited it out, though she forgot to remove Treadmills from the title.

Ms. Sun means for this novel to have an impact. At the end of the book she includes a short statement that inspired Jack Dalton’s contract, the Ballad of John Henry (which is germane to the entire novel), a description of The Great Tuning, developed by Joanna Macy as part of The Work That Reconnects and The Earth Charter, The Universal Declaration of Human Rights developed by Eleanor Roosevelt.

Rivera Sun has red hair, a twin sister and a fondness for esoteric mystics. She went to Bennington College to study writing as a Harcourt Scholar and graduated with a degree in dance. She founded the nationally touring Rising Sun Dance & Theater company in 2010. The company performed a series of plays, The Freedom Stories of Lala by Ms. Sun. She has published various other works of fiction and poetry and is currently writing another novel, The Dandelion Insurrection.

Steam Drills, Treadmills, and Shooting Stars, a revolutionary novel on coal and climate change is being offered as a GIFT today through Saturday midnight, downloadable from http://www.amazon.com/Drills-Treadmills-Shooting-times–ebook/dp/B00B41B1T8/.

Following in the lineage of Mark Twain, Upton Sinclair and Zora Neale Hurston, author Rivera Sun is “dipping our heads in a bucket of truth”. She “sings the anthem of our times”, uplifting and awakening humanity as we strive for a future on this planet. Please enjoy the book and share this link far and wide! You can do what the mainstream press will never do for an authentic voice of freedom. Thank you. — Dariel Garner

The Battle of Blair Mountain by Chris Hedges