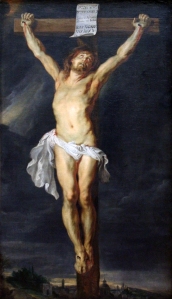 In The Passion: Photography from the Movie “The Passion of the Christ,” Gibson says “This is a movie about love, hope, faith, and forgiveness. Jesus died for all mankind, suffered for all of us. It’s time to get back to that basic message. The world has gone nuts. We could all use a little more love, faith, hope, and forgiveness.”

He also explains one of his appearances in the film, the close-up of his hands nailing Jesus to the cross: “It was me that put Him on the cross. It was my sins that put Jesus there.”

“For God so loved the world that He gave His only begotten Son, that whoever believes in Him should not perish but have everlasting life” (John 3:16)

“Therefore, if anyone is in Christ, he is a new creation; old things have passed away; behold, all things have become new” (2Corinthians 5:17)

What Jesus Said About Resurrection (reposted)

Art Katz: And They Crucified Him (repost)

33 thoughts on “The Passion of the Christ (reposted)”