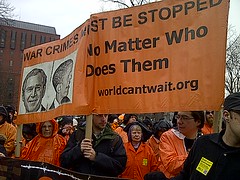 George W. Bush is riding high. A megamillionaire, from the taxpayer-subsidized Texas Rangers company, he makes $150,000 to $200,000 per speech, receives a large presidential pension and support facilities and is about to dedicate the $500 million George W. Bush Presidential Library and Museum on April 25.

President Obama will be at the dedication, continuing to legitimize Mr. Bush, as he did from the outset by announcing in 2009 there would be no investigations or prosecutions of the Bush officials for their crimes.

But he and Dick Cheney made them happen, although Mr. Bush attributed some military events to Providence. One of the “things” he is comfortable with was his criminal, unconstitutional invasion and occupation of Iraq, which took over one million Iraqi lives – children, women and men – created 5 million refugees and committed overall sociocide on that country which posed no threat to the U.S. The carnage continues to this day by a militarized al-Qaeda-in-Iraq that didn’t exist before his invasion.

Apparently, Mr. Bush is “comfortable” with the price paid by the U.S. soldiers and their broken families – over 5,000 fatalities and suicides, 200,000 injuries, illnesses and traumatic syndromes – and by U.S. taxpayers, who over time will pay an estimated 3 trillion dollars according to Nobel Laureate and economist, Joseph Stiglitz.

Former Rep. Ron Paul (R-Texas) has said repeatedly that Bush and Cheney “lied us into invading Iraq.” Such an understatement. Bush and Cheney not only lied about Saddam’s weapons of mass destruction, they also deceived, covered-up, corrupted or intimidated the mass media, bullied an abdicatory Congress, and delivered a false address to the United Nations with the now regretful Secretary of State Colin Powell.

Two secretary generals of the UN subsequently declared Bush’s war of aggression against Iraq to be a violation of international law.

Bush suffers no qualms about the brutal realities of his war and his recidivist violations of our Constitution, federal statutes and international treaties. “One of the real challenges of life is when you complete a chapter, you don’t atrophy, that you continue to find ways to contribute,” said Bush in an interview with The Dallas Morning News. Army veteran Tomas Young is atrophying from his massive wounds in Iraq. Before he decides to end his devastated life, possibly this month, he summoned his moral energy to write Mr. Bush a poignant letter calling him to account for his war crimes. Bush, however, never responds. After all he’s “comfortable” and that bloody “chapter” is closed.

The American people have yet to come to terms with the reality that presidents are above the law. Presidents can commit repeated crimes in an outlaw presidency so long as they can invoke, however falsely and vaguely, national security.

Were presidents to engage in personal crimes or obstruction of justice, like Nixon with the burglary of the Democratic Party’s Watergate offices, the law and Congress can hold them accountable. But Bush and Cheney had bigger fish to fry with their destruction of justice. As the ancient Roman historian Tacitus wrote: “The worst crimes were dared by a few, willed by more, and tolerated by all.”

Fortunately, for our fragile democracy, there were dissenters. After 9/11, leading civil liberty groups objected to provisions in the Patriot Act that allowed searches of your home and businesses without telling you for 72 hours. And, the muzzling of librarians and custodians of your financial medical records from even telling you that the feds are retrieving them. And warrantless snooping on millions of Americans.

In the months leading to the invasion of Iraq in March 2003, more than three hundred retired generals, admirals, high ranking officers, national security officials and diplomats spoke out against any invasion.

Retired General and former Director of the National Security Agency Bill Odom called the invasion the most strategic military blunder in our history. Bush’s father was privately opposed to the invasion, urging his top retired advisors, James Baker and Brent Scowcroft to speak and write against the pending invasion.

The venerable, conservative American Bar Association weighed in with three White Papers declaring Bush’s many signing statements – that he was not bound by legislation – domestic surveillance and treatment of enemy combatants were unconstitutional actions. Bush never acknowledged these reports. And this week, a bipartisan report by the Constitution Project concluded that Bush/Cheney approved torture practices at Guantanamo.

All the above plus mass anti-war rallies in Washington, D.C. and elsewhere did not slow the march to war. The protests were not strong enough to penetrate the political and electoral systems. Until that happens, criminal unconstitutional actions regularly conducted at top levels of our government will not, as a practical matter, trigger either the application of the rule of law or the impeachment authority of the U.S. Congress. To the contrary, each succeeding President feels free to push the illegal, unconstitutional envelope further.

So the lawless legacy of George W. Bush continues under Obama – sometimes worse, sometimes not. Indefinite detention, arbitrary use of military rather than civil tribunals, secret evidence and secret laws, war crimes, secret courts, immunity from judicial review, continual snooping on citizens, extraordinary renditions to foreign countries and, for the first time, President Barack Obama claims to have the right to assassinate an American citizen, far from the battlefield, in his sole secret judgment as prosecutor, judge, jury and executioner. All shame the Obama Administration.

The above list comes from the great law professor, Jonathan Turley of George Washington University, who published a chilling article in the Washington Post on January 15, 2012.

The Presidential outlawry continues as a bipartisan dissolution of our constitutional system because the vast majority of the “we the people” are not demanding our constitutionally sovereign power. They give truth to Tacitus’ dictum.

On April 25, George W. Bush will bask in the fawning media sunlight of his presidential library and museum. The devastated people of Iraq and the soldiers of America, sent to kill and die in Bush’s illegal, boomeranging war, may have some exhibits, pictures and artifacts to suggest for the museum’s collection.

“The Crime of the Century”: Napalm Use in Iraq by Felicity Arbuthnot

The Sociocide of Iraq by Bush/Cheney by Ralph Nader

Guantanamo Exposes Reality of US Fascism by Finian Cunningham

The Crucifixion of Tomas Young by Chris Hedges