Repost of War Is Betrayal by Chris Hedges. 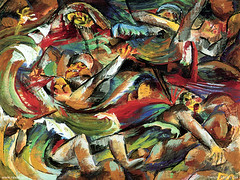 This piece originally appeared in the Boston Review.

We condition the poor and the working class to go to war. We promise them honor, status, glory, and adventure. We promise boys they will become men. We hold these promises up against the dead-end jobs of small-town life, the financial dislocations, credit card debt, bad marriages, lack of health insurance, and dread of unemployment. The military is the call of the Sirens, the enticement that has for generations seduced young Americans working in fast food restaurants or behind the counters of Walmarts to fight and die for war profiteers and elites.

Chris Hedges: Those who are most attracted to war are the most incapable of love

Soldiers of Conscience: To kill or not to kill?

The Body Baggers of Iraq by Chris Hedges

Chris Hedges: War is a Force that Gives us Meaning (2004; must-see; transcript)]

6 thoughts on “War Is A Soulless Void by Chris Hedges”