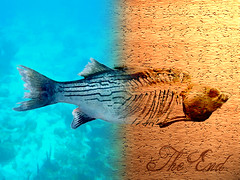 Recorded May 7 2013 in Denver, Colorado at an event organized by community radio station KGNU (http://kgnu.org). Noted social critic Noam Chomsky talks about the willful and reckless destruction of the environment by the US and other Western nations. Corporate-run governments have abdicated their responsibility toward protecting the welfare of their citizens and are rushing the world toward climate catastrophe.

END_OF_DOCUMENT_TOKEN_TO_BE_REPLACED

The dust in Iraq rolls down the long roads that are the desert’s fingers. It gets in your eyes and nose and throat; it swirls in markets and school playgrounds, consuming children kicking a ball; and it carries, according to Dr. Jawad Al-Ali, “the seeds of our death”. An internationally respected cancer specialist at the Sadr Teaching Hospital in Basra, Dr. Ali told me that in 1999, and today his warning is irrefutable. “Before the Gulf war,” he said, “we had two or three cancer patients a month. END_OF_DOCUMENT_TOKEN_TO_BE_REPLACED