The Ethiopian military and paramilitary forces, operating in the Ogaden region of Ethiopia, are, it is alleged, carrying out extra judicial killings and gang rapes; falsely arresting and torturing innocent civilians; looting and destroying villages and crops in a systematic attempt to terrify the people. This is the consistent message coming out of the region and from those who have fled persecution and are now in the world’s largest refugee camp, in Dadaab, Kenya. It is a message of government brutality and collective suffering taking place not only in the Ogaden but in a number of areas of Ethiopia, including the Amhara region, Gambella, Oromia and the Omo valley. Regime brutality that Genocide Watch (GW) consider “to have already reached Stage 7 (of 8), genocide massacres, against many of its peoples, including the Anuak, Ogadeni, Oromo, and Omo tribes”.  They call on the EPRDF regime to “adhere to it’s own constitution and allow its provinces the legal autonomy they are guaranteed.”

Around five million people live in the Ogaden (or Somali) region of Ethiopia. Predominantly ethnic Somali’s, mostly pastoralists, they live in what is one of the least developed corners of the world. Ravaged by drought and famine, the region has been the battleground for violent disputes between Ethiopia and Somalia for generations. The Ogaden National Liberation Front (ONLF), claim the people of the region want self-determination from Ethiopia, a right they have been fighting for since their formation in 1984. A right enshrined in the 19th Century agreement (enacted in 1948) with Britain, when sovereignty and control of the region was passed to Ethiopia. A crucial proviso, successive Ethiopian governments have conveniently ignored.

With the international media banned by the Ethiopian government since 2007 and with an economic and aid embargo being enforced the region is totally isolated, making gathering information about the situation within the five affected districts difficult. I recently spent a week in Dadaab where I met dozens of refugees from the Ogaden; men, women and children who repeatedly relayed accounts of murder, rape, torture and intimidation at the hands of government forces. Accounts that if true, – and we have no reason to doubt them, confirm reports from, among others – Human Rights Watch, Amnesty International and Genocide Watch – who make clear their view, that the Ethiopian government has “initiated a genocidal campaign against the Ogaden Somali population”, constituting “war crimes and crimes against humanity”.

The people, victims of terrible abuse, carry with them the scars, often physical, always psychological, of their horrific ordeal. Listening to their stories and the testimonies of former Liyuu personnel, a clear picture of the systematic approach being employed by the Ethiopian military and Liyuu Police operating within the Ogaden emerges.

Arbitrary killings, rape, torture, and destruction of property are the unimaginative preferred tools of terror, ‘use the penis as a weapon against the women’ the men are told, burn villagers homes and steal their cattle, confiscate humanitarian aid-including food, and create an intolerable fear ridden environment. Men joining the Ethiopian military and Liyuu Police, like 25 year old Abdi who arrived in Dadaab in January 2013 and like many was forcibly recruited, are told, “there is no court that can control you, that we were free from the law, enjoy your freedom, they told us.” The methodology of occupation, including extra judicial killing, is made clear,  “we were told to rape the young women… When we went into the rural areas, we were 300 men. When we saw a young mother with children aged from one years old to five years old, we would rape her.” 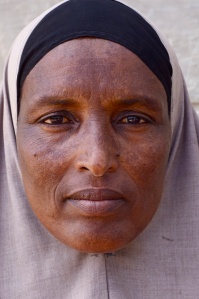 Women, like 27-year-old Rohar, tell of arbitrary arrests and torture. Imprisoned with her husband when she was “in the ninth month of pregnancy. We were made to walk for three days and three nights before a bus collected us and drove us for one more day/night to Jijiga.” Detained for two years without charge in Jail Ogaden in Jijiga, Rohar, as most detainees are, was accused of supporting the ONLF and “repeatedly tortured from the very beginning even though I was pregnant. They would tie a rope around the branch of a tree and a noose around my neck, then they would pull on the rope to strangle me. The evidence is still on my body – (she shows me a terrible burn scar on her neck).”  Throughout this time she reports being “raped by groups of soldiers. It used to happen around midnight. I can only remember the first three men who raped me. They would take me out and leave the child/baby in the room with the other women, and bring me back in the early morning.”  Rohar was released when she was no more use to the soldiers after becoming unwell with abdominal pains, caused, she believes, by the repeated rapes. This account, from beginning to end is typical of many women’s experiences.

A divisional commander, now in Dadaab, related how during their three-month training in the Liyuu they were shown demonstrations in “how to rape a woman, and how to break a virgin”. They are carrying out atrocities in the region in order,  “to make the people afraid and to place them under the control of the Ethiopian military, and fundamentally “because there is oil in the region and the government wants the oil for themselves. The military is there to make the people fearful so they won’t support the ONLF.”

Back in the late 19th century, when the region was under British control, oil was suspected to be present in the region, in 1936 under the Italian occupation geological mapping of the Ogaden Basin began by the Italian oil company AGIP. Their records were later used by other companies in early studies of the region and in the early 1940’s oil exploration in the Ogaden basin began.

In 1972 the American company Tenneco drilled a series of wells and found oil and gas. These discoveries mean the region, now desperately poor, is potentially the richest area of the country. In 1975 in the wake of the Ethiopian revolution, the company stopped operations and the military junta expelled all foreign companies. In the past fifty years or so it is estimated that 46 wells have been drilled searching for the black gold.

It would appear the Ethiopian government sees the natural resources of the Ogaden as another party asset to add to its burgeoning portfolio. People living within 100 km of oil exploration sites have been displaced, some GW tell us are herded into internally displaced camps, whilst others are simply made homeless. Sharing the view of the Liyuu recruit, the ONLF believes the Ethiopian military intends to secure the resources for the government and exclude local people. The Africa Faith and Justice Network confirms this view, saying: “With the discovery of petroleum leading to exploration missions by foreign companies, the government’s motives [in the region] are questionable.”

Why, In the face of such blatant state criminality, do donor countries – America, Britain and the European Union, who provide between a third and a half of Ethiopia’s federal budget, remain silent, this the common-sense question, repeatedly asked by victims of abuse. Ethiopia is of course a key strategic ally of America and the west in their fight against extreme Islamic groups, the US has military bases in Ethiopia from where it launches its unmanned drones into Somalia and Yemen. Add to this the potential oil bonanza in the Ogaden, and indeed elsewhere in the country, and a toxic cocktail of mixed motives and self-interest starts to ferment.

The EPRDF government, under the premiership of Mr. Hailemariam Desalegn, when confronted with accounts of military criminality issues blanket denials and accuses groups, such as HRW, of political bias and misinformation. Duplicitous and disingenuous, the regime, which owns most of the media in Ethiopia, seeks to control the flow of information within and without the country, and hide the atrocities being committed by the military and Liyuu to innocent civilians in the Ogaden and indeed elsewhere. If the government has nothing to hide Mr. Desalegn then open up the region to humanitarian aid groups and allow journalists unrestricted access.

Peace is the number one priority in the Ogaden and for humanity more broadly, and all measures to remove the obstacles to its realization should be made by those working for the people of the region. Discussions held in Nairobi in September 2012 broke down when the ONLF refused to accept the condition of constitutional recognition asked of them by the government team. This was unfortunate and to my mind ill judged, what should be insisted upon however, is that both the military/Liyuu and the ONLF lay down their arms and agree an unconditional ceasefire. It is hard to see how one can negotiate a long term solution whilst innocent men are being tortured, women raped, children terrified and homes destroyed.

Under Darkness in the Somali Region of Ethiopia by Graham Peebles

Rape and Torture as a Weapon of Control by Graham Peebles

The Green Green Gold of Ethiopia by Graham Peebles

Displacement, Intimidation and Abuse–Land Loyalties in Ethiopia by Graham Peebles

Ethiopian Annihilation of the Ogaden People, by Graham Peebles