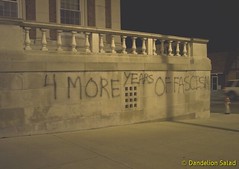 American politics, as the midterm elections demonstrated, have descended into the irrational. On one side stands a corrupt liberal class, bereft of ideas and unable to respond coherently to the collapse of the global economy, the dismantling of our manufacturing sector and the deadly assault on the ecosystem. On the other side stands a mass of increasingly bitter people whose alienation, desperation and rage fuel emotionally driven and incoherent political agendas. It is a recipe for fascism.

Chris Hedges Answers “Why Are We Not Calling This Fascism?”

Rise Up or Die! by Chris Hedges

Transformation of Fascism in the Twentieth Century: A Comprehensive Theory by Fazal Rahman, Ph.D.

2 thoughts on “A Recipe For Fascism by Chris Hedges (repost)”