In his book, ‘Propaganda’, published in 1928, Edward Bernays wrote:

“The conscious and intelligent manipulation of the organised habits and opinions of the masses is an important element in democratic society. Those who manipulate this unseen mechanism of society constitute an invisible government which is the true ruling power of our country.”

The American nephew of Sigmund Freud, Bernays invented the term “public relations” as a euphemism for state propaganda. END_OF_DOCUMENT_TOKEN_TO_BE_REPLACED 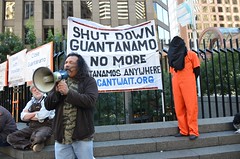 END_OF_DOCUMENT_TOKEN_TO_BE_REPLACED

On May 14, 2013, the Technology and Culture Forum at MIT sponsored an event, “Iran and American Foreign Policy: Where Did the U.S. Go wrong?”, featuring Noam Chomsky and Flynt and Hillary Leverett, authors of the controversial “Going to Tehran: Why the United States Must Come to Terms with the Islamic Republic of Iran.” Hillary Mann Leverett starts 18:20 into the video, Flynt Leverett at 37:00, and Noam Chomsky at 54:00.