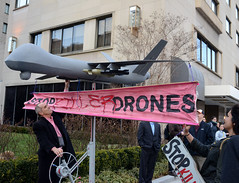 […] The Bush and Obama administrations have created the first U.S. force of American assassins in our history. They’ve also created automated machines of war called drones. They have to come up with new missions.

For example, President Obama stated as recently as last month that the drone strikes are only aimed at people whose names we know who are plotting to kill us back in America and who we can’t get any other way. This was an absolute falsehood. The evidence is overwhelming that most of the strikes, drone strikes in Pakistan, in Yemen, in Somalia are what they call signature strikes. These are strikes against people whose names they don’t know. They have no idea what their names are. They’re bombing–they’re drone-striking them on the basis of there’s a crowd of people who they decide might be hiding a militant.

Now, you might ask yourself, why did they go from striking named people to striking unnamed people? Why did they go–they’ve only been able to name 77 senior al-Qaeda leaders and Taliban leaders by name, and they’ve killed 3,000 to 5,000 other people. Well, the reason is obvious. There were all these drones sitting around out there. They don’t know the names of that many, quote, senior al-Qaeda leaders. They ran out of targets. So they then decided to start killing nameless people, which both General McChrystal and the former director of national intelligence now tell us is infuriating the Muslim world.

World’s Most Evil and Lawless Institution? The Executive Branch of the U.S. Government by Fred Branfman (Part 2)

Mr. President, I Want A “Divorce” by Jill Dalton