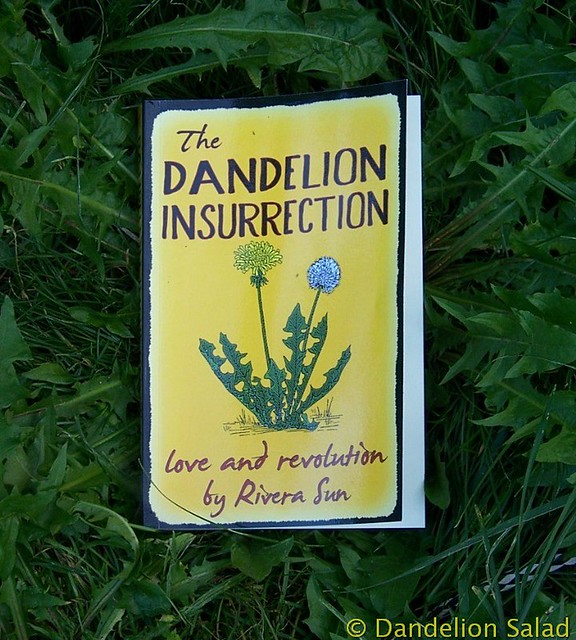 In her latest novel, The Dandelion Insurrection – Love and Revolution (Rising Sun Press, 2013), Rivera Sun paints a bleak and believable picture of modern day USA with a Martial law controlled population fed a diet of fear mongering by government and corporate media which allows the few to accumulate untold wealth, Sun’s painting is as stark as that depicted by Philip K. Dick in his book, The Man In The High Tower, where he describes an occupied country controlled by the Germans and Japanese who won WWII.

Fortunately, Sun does not dwell on the darkness and seemingly hopelessness of the situation. She offers hope, viable and realistic as that described by Jack London in his 1907 book, The Road, where a tramp, a hobo, goes up to a doctor in Kansas to seek medical help for an injured companion. The doctor takes one look at him and how shabbily he is dressed, knowing he has no money to pay for his services. Before he can turn away in disgust, the hobo recites the entire Hippocratic Oath to him, which has everything to do with helping and healing his fellow man, and nothing to do with money. Needless to say, the doctor treats his companion.

The two improbable main characters of this well written novel are, Charlie Rider (aka The Man From The North) a young man of Acadian French extraction from a small town along the Maine Canadian border. Censorship is in effect for anything which criticizes the government and Charlie regularly writes about the abuses of the government and has the articles smuggled into the country through Canada. Zadie Byrd Gray, the other main character, is also of Acadian French heritage. She is from the same small town as Charlie, who has been in love with her all his life, though she ran away at sixteen and went to the big city where she made many contacts, became a prostitute and had two abortions, though she never lost the sense of confidence in herself or hope. It is primarily through her contacts the Dandelion Insurrection takes place.

The aptly named Dandelion Insurrection is primarily about people making people to people connections, and cutting the government and corporations out of the equation. Since every part of the dandelion, which is primarily thought of as a weed, is edible and medicinal, that allows for a lot of contacts: contacts with the wealthy, the undocumented, the every day worker, the farmer, even police officers and soldiers. After all, the dandelion is closely related to milkweed, the food of preference for Monarch butterflies, and when milkweed is not available, the butterflies have been known to feed on dandelion. Dandelion seeds, small feathery airborne particles propagating and fertilizing the world, a plant world internet.

This enjoyable readable book is highly recommended. With all its twists of plot, and myriad of very real characters, it not only entertains, it offers a lot of insights as to how the citizens of the US and the world can reclaim their country from the corporations and political stooges which have taken over. Everyone interested in change should read it.

The one criticism this reviewer offers is a minor one of style. Too many similes are used which compares one thing with another as opposed to a straight forward and stronger description.

It Has Happened Here – What Now? by Luke Hiken

Socialism: Change Has to Begin at the Roots by William T. Hathaway

from the archives (not related):