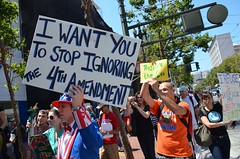 Are we living in a time of inverted totalitarianism? Pulitzer prize-winning author Chris Hedges tells me we are in this first episode of the Moment of Clarity Show – SEASON TWO! This episode was made possible by Coalition Films and our generous Kickstarter supporters!

END_OF_DOCUMENT_TOKEN_TO_BE_REPLACED

Addressing the United Nations General Assembly in New York this week, President Barack Obama delivered his usual barrage of myth and mendacity concerning the role of the US in the world.

Some commentators have since swooned at the possibility of dialogue between Iran and US and a new era of diplomacy – all because of a few positive-sounding words uttered by the American president.

END_OF_DOCUMENT_TOKEN_TO_BE_REPLACED

Americans have long embraced a notion of superiority, claims Howard Zinn. Governor Winthrop of the Massachusetts Bay Colony described establishing “a city on a hill,” to serve the world as a beacon of liberty. So far, so good. But driving this sense of destiny, says Zinn, was an assumption of divine agency—“an association between what the government does and what God approves of.” END_OF_DOCUMENT_TOKEN_TO_BE_REPLACED