Abby Martin speaks with Margaret Flowers, Organizer for Popular Resistance about why fast tracking the TPP is so dangerous to the democratic process, and why everyone should care about this “free trade deal”.

END_OF_DOCUMENT_TOKEN_TO_BE_REPLACED 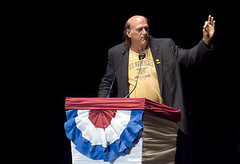