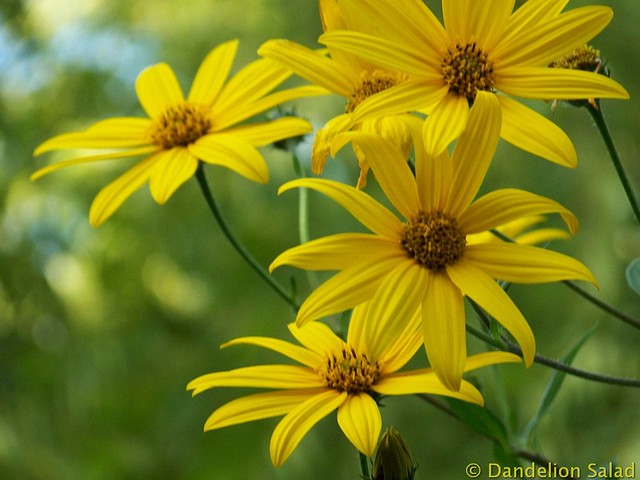 The Jerusalem artichoke (Helianthus tuberosus), also called sunroot, sunchoke, earth apple or topinambour, is a species of sunflower native to eastern North America, and found from eastern Canada and Maine west to North Dakota, and south to northern Florida and Texas.[1]

It is also cultivated widely across the temperate zone for its tuber, which is used as a root vegetable.[2] 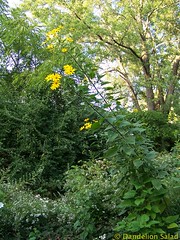 It is a herbaceous perennial plant growing to 1.5–3 metres (4 ft 10 in–9 ft 10 in) tall with opposite leaves on the upper part of the stem but alternate below.[3] The leaves have a rough, hairy texture and the larger leaves on the lower stem are broad ovoid-acute and can be up to 30 centimetres (12 in) long, and the higher leaves smaller and narrower.

The flowers are yellow and produced in capitate flowerheads, which are 5–10 centimetres (2.0–3.9 in) in diameter, with 10–20 ray florets.

The artichoke contains about 10% protein, no oil, and a surprising lack of starch. However, it is rich in the carbohydrate inulin (76%), which is a polymer of the monosaccharide fructose. Tubers that are stored for any length of time will digest their inulin into its component fructose. Jerusalem artichokes have an underlying sweet taste because of the fructose, which is about one and a half times sweeter than sucrose.[5]

Jerusalem artichokes have also been promoted as a healthy choice for diabetics. This is because fructose is better tolerated by people that are diabetic. It has also been reported as a folk remedy for diabetes.[5] Temperature variances have been shown to affect the amount of inulin the Jerusalem artichoke can produce. When not in tropical regions, it has been shown to make less inulin than when it is in a warmer region.[6] 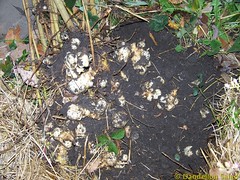 Despite its name, the Jerusalem artichoke has no relation to Jerusalem, and it is not a type of artichoke, though both are members of the daisy family. The origin of the name is uncertain. Italian settlers in the USA called the plant girasole, the Italian word for sunflower, because of its resemblance to the garden sunflower (note: both the sunflower and the sunchoke are part of the same genus: Helianthus).

Unlike most tubers, but in common with other members of the Asteraceae (including the artichoke), the tubers store the carbohydrate inulin (not to be confused with insulin) instead of starch. For this reason, Jerusalem artichoke tubers are an important source of inulin used as a dietary fiber in food manufacturing.[8] 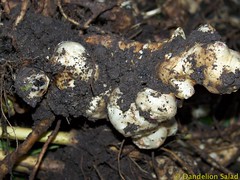 The tubers are sometimes used as a substitute for potatoes:[9] they have a similar consistency, and in their raw form have a similar texture, but a sweeter, nuttier flavor; raw and sliced thinly, they are fit for a salad. The carbohydrates give the tubers a tendency to become soft and mushy if boiled, but they retain their texture better when steamed.

How to Cook Jerusalem Artichokes

In this week’s video, Guy Watson from Riverford Organic talks about Jerusalem artichokes and gives some tips and ideas for using them as well as a recipe.

Jerusalem Artichoke is one of the lesser known vegetables in our range. It vaguely resembles ginger root in its appearance and has gnarly stems and a pale brown skin. Don’t let the way it looks put you off though, here are three ways to tackle these knobbly little critters.

The Jerusalem Artichoke as survival food

Jerusalem Artichokes, aka sunchokes, as element in food security preparations.

I’m harvesting my Jerusalem artichokes and planting some too.

4 thoughts on “Growing, Harvesting and Eating the Jerusalem Artichoke”