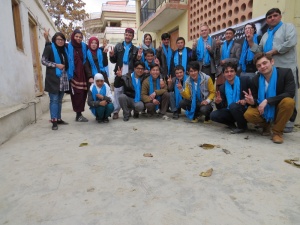 The Afghan Peace Volunteers in Kabul, with British and Swedish friends

“The political and economic mafia of Afghanistan and the world run this country with their guns and bombs,” says Abdulhai, a 17 year old Afghan Peace Volunteer. “We the people are rather helpless, unless we stand together.”

Abdulhai’s sentiment helps to describe what is needed in the Borderfree movement: ordinary people of our human family from all walks of life and from every country standing together to build non-violent alternatives under the same blue sky (symbolized by the Borderfree Blue Scarves), relating and working for a better, more equal world.

Today, 60% of Afghan children are malnourished. At least 2500 Afghan women committed suicide in 2012. And over the past four decades, Afghan families have lost at least 2 million loved ones to wars.

Abdulhai and the Afghan Peace Volunteers wish to address these crises by abolishing wars, sharing resources and taking care of the earth. No more war! No more economic exploitation by the 1%! No more destruction of the earth and climate! No more systemic hunger and homelessness! No more thought-numbing bias from the media!

Taking up Prof Noam Chomsky’s challenge to build a world free of borders, we hope for people and friends to work together around climate change, socioeconomic inequalities, militarism with its wars and other global challenges facing humanity today, organizing solidarity actions as a strong 99%!

We believe that an immediate way to be a strong 99% is to get to know one another through arranging Skype or telephone connections across all borders. The Afghan Peace Volunteers in Kabul can connect with you on any day of the week except Fridays. Please arrange a suitable date and time of connection by emailing: borderfree@mail2world.com

We wish to speak via Skype or telephone with ordinary folk, youth, students, farmers, labourers, teachers, musicians and artists, environmentalists, social workers, indigenous communities, friends and activists from every single country in the world, thus catalyzing the most powerful force in the world – love.

Please send this request to your family, friends and acquaintances.

We wish to hear your ‘Borderfree’ voice!

The Man From the North: Send Me Your Blessings, Oh Angels of People! by Rivera Sun

Who’s Excited About Another Decade in Afghanistan? by David Swanson

At least 13 Afghan civilians killed, including Hashim (8) and Zukoom (9)