I watched the mainstream national news last night at 6:30 pm. I did a lot of raging at the TV. One of the networks led off with the story about Russia holding war games inside their own country, near the Ukrainian border. The White House and Secretary of State John Kerry issued stern warnings to Russia about not trying to “interfere” with the current balkanization of the Ukraine. In Crimea, riots between pro-EU and pro-Russian citizens broke out. The Russian Navy has their Black Sea base in Crimea.

END_OF_DOCUMENT_TOKEN_TO_BE_REPLACED

democracynow – We go to Bahrain to speak with human rights activist Zainab Alkhawaja, just after she was released from prison by the Bahraini government. “One year in prison is nothing,” Alkhawaja says of her time behind bars. “Because it’s nothing compared to what we’re willing to sacrifice for our goals, for democracy in our country.” END_OF_DOCUMENT_TOKEN_TO_BE_REPLACED

“Agriculture is the oldest environmental problem,” the Land Institute’s Wes Jackson tells us early in this 27-minute video. Through interviews with 11 scientists, researchers and environmental experts, this short documentary considers that fate of agriculture and the environment in the age of agri-business and climate change. END_OF_DOCUMENT_TOKEN_TO_BE_REPLACED

END_OF_DOCUMENT_TOKEN_TO_BE_REPLACED

In its third annual ‘State of Power’ report, TNI uses vibrant infographics and penetrating essays to expose and analyse the principal power-brokers that have caused financial, economic, social and ecological crises worldwide.

In my contribution to the ‘State of Power’ report (and in cooperation with Occupy.com), “State of Europe: How the European Round Table of Industrialists Came to Wage Class War on Europe,” I examine the role of a major corporate interest group in shaping the policies of the European Union.

END_OF_DOCUMENT_TOKEN_TO_BE_REPLACED

Image by Paulo Filgueiras via United Nations Photo via Flickr

The Sochi Olympics were the great success Russia hoped for. The opening ceremonies proved a radiant display drawing on Russia’s most compelling cultural assets. This artful look back to Russia’s past greatness proved both a reminder and challenge to its own people to reprise their historical greatness going forward. Meanwhile, its closing ceremonies reprised these themes, reminding the viewer of Russia’s continued vibrancy in the arts.

END_OF_DOCUMENT_TOKEN_TO_BE_REPLACED

The White House
Office of the Press Secretary
For Immediate Release
February 24, 2014

END_OF_DOCUMENT_TOKEN_TO_BE_REPLACED

The tightening two-party duopoly has been moving relentlessly in the direction of common funding of candidates by the same privileged interests. The exclusion of independent or third party competitors through costly ballot access hurdles (see: opendebates.org for more information), litigious harassment, and barring them from debates has been well-documented. Gerrymandering into one-party districts has eliminated political competition in many states. Furthermore, there is no “none of the above option” on the ballot to allow for a no-confidence vote. Voters are told either to cast a yes vote or stay home.

END_OF_DOCUMENT_TOKEN_TO_BE_REPLACED

Prior to 2008, one of the most notable examples of a highly destructive financial crisis took place in Argentina which, heavily in debt, faced a large default and was brutally punished by financial markets and the speculative assault of global finance, otherwise known as “capital flight.” END_OF_DOCUMENT_TOKEN_TO_BE_REPLACED

It’s not too difficult, but it can be confusing to comment on WordPress.com’s blogs. Here is a screenshot from the comment box on my blog, Dandelion Salad. 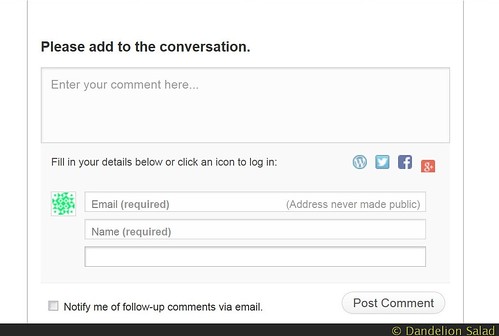 END_OF_DOCUMENT_TOKEN_TO_BE_REPLACED

Federal officials confirmed a local nuclear plant in southern New Mexico is leaking waste and releasing radiation into the surrounding area. The Waste Isolation Pilot Plant in Carlsbad was leaking for days before state officials were notified. END_OF_DOCUMENT_TOKEN_TO_BE_REPLACED

It is unprecedented that simultaneously three countries that are allies of Russia are being threatened by color revolutions: Venezuela, the Bosnian Serb Republic (Republika Srpska) and Ukraine. These synthetic uprisings orchestrated by the US/NATO/EU would have been identified as the uprisings of fascistic guttersnipes 100 years ago, but in 2014 they are being portrayed as democracy or freedom movements, by the same people who are organizing them to destroy country after country. END_OF_DOCUMENT_TOKEN_TO_BE_REPLACED

We have all wondered adrift, consumed by our own moral complicity and jaded by the broader darkness of fear. Make no mistake: we are all among the Parmenidean “Deaf, Dumb, Blind, and Stupid – unreasoning cattle.”

To simply exist amongst this dark wave of history, predicted by ancient mystic cultures and sages past, is to be swept up, sometimes without recognition, in a frequency of hatred and corruption. END_OF_DOCUMENT_TOKEN_TO_BE_REPLACED

On September 7th 2012, the US Department of State (“Diplomacy in Action”) assured on their website:

“The U.S. Mission in Iraq remains dedicated to building a strategic partnership with Iraq and the Iraqi people … Iraq continues to develop as a sovereign, stable … country … a voice of moderation and democracy in the Middle East.