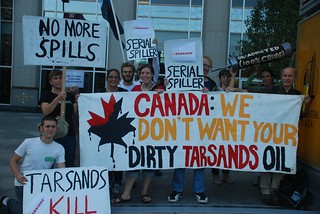 Most of the Keystone XL chatter these days is about the U.S. State Department fantasy that tapping the tar sands of Canada will be a benign blessing for America and the world. But almost no one mentions the Texas Supreme Court case that could shut the pipeline down completely – since a court ruling for the appellant could mean that the pipeline was built on property to which the pipeline owner had no rights.

If completed, the 1,700-mile Keystone pipeline is intended to bring highly-polluting tar sands oil from the Canadian tar sands to the Texas Gulf Coast, where much of it will likely be refined and shipped overseas. There is no dispute that tar sands oil (or dilbit) is a pollutant that contributes exorbitantly to climate change, but there is debate as to whether burning this oil will be more harmful to the planet than the extraction process itself in the oil pits of Northern Alberta (as in “Game Over for the Climate“).

At issue in the Texas case is the TransCanada southern section of the pipeline, which is already built, but may be located on land to which the TransCanada corporation has no legal right. That’s the argument of the Crawford Family Farm Partnership in its 25-page petition filed with the Texas Supreme Court on November 4, 2013. The first response from TransCanada was to ask the court for a waiver from responding, in effect asking to close the case immediately.

But the Texas Supreme Court did not grant that waiver and, on January 7, 2014, ordered TransCanada to file a response by midnight on February 6.

Julia Trigg Crawford, in a press release for the Crawford Family Farm Partnership, characterized the court’s action as “a clear victory for pipeline opponents and landowners fighting TransCanada’s overreach on property rights.” As victories go, this one is pretty limited, since all it means is that TransCanada has to make its case to the court. The court could still rule for TransCanada, as lower courts have in the past.

Eminent domain ruling could save the planet – is that ironic?

This is an eminent domain case, not an environmental case. TransCanada used the state’s eminent domain law to take land from the Crawford Family Farm (and others from Oklahoma to the Gulf Coast) to use as the pipeline route. This corporate use of state power by a private, foreign corporation was allowed by the Texas Railroad Commission, which has an unsavory history of its own. Julia Trigg Crawford has been fighting this issue in court since 2012, losing peremptorily at the local trial court in Lamar County and again at the 6th Court of Appeals.

As the Crawford Family Farm press release explained it:

“At the heart of Crawford’s case is the ability of TransCanada, a foreign corporation, to use eminent domain under the state’s ‘common carrier’ clause since their pipeline transports 90% Canadian tar sands and 10% North Dakota oil. There is no on ramp for Texas oil therefore violating the definition of a common carrier under Texas law.”

According to Texas custom, all one has to do to become a common carrier – and thereby be able to wield eminent domain power – is to check a box on a form provided by the Texas Railroad Commission, which then says OK, bud, go get ’em! No proof required, no evidence requested, no fact check made, no hearing held, no questions asked. Check the box and you’re it.

“TransCanada is not a common carrier with statutory eminent domain authority and cannot condemn appellant’s property because it cannot subject itself to the provisions of Texas Natural Resource Code, Chapter 111…. Therefore, the court lacks subject matter jurisdiction, and the trial court’s orders denying appellant’s plea to the jurisdiction and granting TransCanada’s motions for summary judgment must be reversed.”

“Private property is constitutionally protected, and a private enterprise cannot acquire condemnation power merely by checking boxes on a one-page form. We reverse the court of appeals’ judgment, and remand this case to the district court for further proceedings consistent with this opinion.”

Meanwhile the clock on the 105-day comment period on the State Department’s fraudulent environmental report is ticking, and it’s not clear whether the Texas court will act within that time. Wait, “fraudulent” report? Well, based on early reporting, the report is:

Intellectually fraudulent: By assessing just the pipeline element of the tar sands nexus, the report can’t possibly be meaningful. It’s like assessing an elephant based on only its left foot. When the report says, “the proposed Project [pipeline] is unlikely to significantly affect the rate of extraction in oil sands areas (based on expected oil prices, oil-sands supply costs, transport costs, and supply-demand scenarios)” – that translates into meaning something like: “Canada’s going to screw the world no matter what, so we might as well get our piece of the action.” In other words it’s an environmental report that takes no full account of the environment.

Procedurally fraudulent: According to Friends of the Earth, “the U.S. Department of State issued its long-awaited environmental review of the Keystone XL pipeline. The report was written by a dues-paying member of the American Petroleum Institute that lied on its conflict of interest disclosure form.”

Politically fraudulent: First clue, they released it late on a Friday. The main talking point was “it’s not a decision document,” but it raises no significant barrier to approving the pipeline. And the official reaction of TransCanada: “We’re very pleased with the release and about being able to move to this next stage of the process. The case for the Keystone XL, in our view, is as strong as ever.”

TransCanada is right, the case for the pipeline is as strong as ever – which in the view of opponents was never very strong in the first place. And last spring, President Obama promised he would only approve Keystone if it “does not significantly exacerbate the climate problem.”

Well, that’s what the report says. And we’ve seen this shuck and jive before, less than a year ago. Mission accomplished?

William M. Boardman has over 40 years experience in theatre, radio, TV, print journalism, and non-fiction, including 20 years in the Vermont judiciary. He has received honors from Writers Guild of America, Corporation for Public Broadcasting, Vermont Life magazine, and an Emmy Award nomination from the Academy of Television Arts and Sciences.