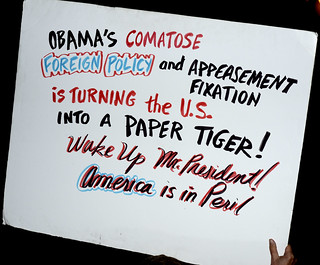 We begin with the premise that the humanitarian crisis in Syria over the past nearly three years is largely as a result of a Western covert proxy war inflicted on that country. The objective is to destabilize, terrorize and eventuate regime change in the Arab country.

The crisis afflicting Syria with over 130,000 dead and nearly nine million people displaced from their homes – nearly 40 per cent of the total population – would not be occurring if it were not for the infiltration of that country with massive flows of weapons, fighting funds and foreign mercenary brigades. US and NATO Special Forces, along with Western military intelligence, have worked with Saudi, Qatari, Jordanian, Israeli and Turk allies to foment this externally driven insurgency. All under the cover of an Arab Spring revolt.

The highly criminal process has attempted to destroy a sovereign country in order to create a new political order, one that is bereft of the existing political establishment under President Bashar Al Assad. This new order brought about by regime change would be amenable to Western interests in terms of Middle East politics and oil economics. In particular, the desired pro-Western regime would deny Russia, China and Iran of an important ally in the Mediterranean.

Western desire for regime change in Syria is well documented, according to American journalist Seymour Hersh, going back to at least 2007 when the George W Bush Presidency conceived of a plan to undermine the Syrian-Iranian resistance against Washington’s regional hegemony. Other historical studies argue that Western plans for regime change in Syria hark even further back to the 1950s when Dwight Eisenhower was US president.

Last year, former French Foreign Minister Roland Dumas revealed that he was approached two years before the outbreak of latest conflict in Syria in March 2011 by British political figures, who told him of a plot to unseat the Syrian government.

So, our premise of Western regime change being the driver of conflict and humanitarian crisis in Syria is on solid ground.

By contrast, the alternative premise of the events in Syria being the result of a “popular pro-democracy uprising against Assad” is a nebulous narrative emanating from Western governments and the Western mainstream media. That narrative does not stand up to scrutiny. A modified version to accommodate the contradiction that the “uprising” has become driven largely by Al Qaeda-linked brigades goes along the lines that the initial pro-democracy movement has somehow been “hijacked by extremists”. But an objective study of the conflict shows that the extremists were always dominant, and that these extremists have been bankrolled, directed and armed by the US-led axis of NATO and regional allies from the outset.

The divergence of these narratives – one based on reality, the other based on propaganda to serve political interests – is reaching a watershed over the humanitarian issue of besieged Syrian cities. The main location currently in focus is the city of Homs, Syria’s third urban centre after the capital, Damascus, and the second city of Aleppo.

In total across Syria, there is reckoned to be some 250,000 civilians trapped in siege situations, according to the United Nations. The conditions for these civilians have deteriorated alarmingly with reports of starvation and privation from lack of basic utilities and medicines.

But which party is responsible for the sieges and the humanitarian suffering? Typically, the Western governments and the Western news media are blaming the Syrian authorities and army for imposing blockades. As with much of their narrative, there is scant factual evidence to support and it seems to rely on assertion and innuendo.

“Syria evacuated 83 civilians on Friday who had lived under government siege in the devastated city of Homs for a year and a half”, read a report in the New York Times on February 8.

The general inference in the Western media is that the Assad government is guilty of a crime against humanity by using starvation as a weapon.

A draft resolution tabled this week at the UN Security Council by Western and Arab states also heavily attributed responsibility for the siege in Homs and other cities to the Syrian government.

Russia and China rejected the draft resolution as “one-sided” and “divorced from reality” – as Russian Foreign Minister Sergei Lavrov put it.

As it turns out in fact, Russia and China are correct in their assessment of the civilian sieges in Syria. Both tend to substantially agree with the Syrian government’s account that the humanitarian suffering of civilians trapped within Homs Old City, as well as in parts of Damascus and Aleppo, are the result of the Western-backed mercenaries. These groups are in effect holding on to urban territory by holding civilians hostage and as human shields.

This was obliquely admitted in the New York Times report cited above. Near the end of that article, the paper noted that why the siege in Homs has endured for nearly 18 months until this week’s arrival of aid convoys and partial evacuation of citizens was because the anti-government militants have previously prevented any deal being done.

“Rebels have rejected similar offers to evacuate women and children in the past because of concerns about what might happen to any men, including fighters, who are left behind”, reported NYT. Or in other words, the so-called rebels were using women and children as human shields.

In another tacit admission of the real situation, as opposed to the propagandized version which blames the Syrian government for the siege, the British Guardian reported that most the civilians evacuated from Homs this week were being accommodated in other parts of the city, that is, in those parts controlled by government forces.

The Guardian reports on February 12:

“The vast majority of those leaving the Old City [of Homs] were heading for the homes of relatives in other parts of Homs, according to the UN.”

Now think about that. If the Syrian government forces were really imposing a barbaric siege on citizens in the Old City district, as the Western media maintain, would those emerging starving citizens then voluntarily go to government-held areas for refuge and respite?

Testimony from some of the Homs’ evacuees bears that view out too. One mother told how life within the trapped city was like “living in a jungle of monsters”. She added that the militants would habitually steal whatever meager food rations the civilians had in their possession.

Several other sources, such as the Governor of Homs, Talal al-Bazzari, confirm that the Syrian government has worked along with the UN and Syrian Arab Red Crescent to break the siege. Aid convoys and evacuation vehicles have been fired on with gunfire and mortars. Reliable sources indicate that it was the militants within the Old City district who opened fire. This is consistent with previous warnings from these same groups that they would attack any UN aid convoys trying to enter the area.

The same hostage-taking, human-shield scenario prevails in the militant-held Yarmouk district of Damascus and in Aleppo. It is clear therefore that the humanitarian crisis within besieged Syrian cities is the pernicious creation of Western-backed mercenaries – the same mercenaries who have been infiltrated into Syria to destroy that country in order to bring about Western regime change.

The humanitarian plight within the besieged city of Homs and other urban areas could serve as a microcosm of the entire conflict that Syria has been subjected to for the past three years. An entire nation has been held to ransom by external forces, comprising Al Qaeda foreign jihadists on the ground, all the way up to Western politicians sitting in high office.

What is disturbing about this criminal process of Western creative destruction is that the cycle does not stop once unleashed. The Western-backed mercenaries create the appalling humanitarian suffering within besieged cities, but instead of that narrative and its authors being rigorously held to account, as it should owing to the emerging facts and testimonies, the Western propagandists move on to another creative-destructive cycle.

Both the Financial Times and the New York Times have this week carried op-ed pieces, which stridently argue that the humanitarian crisis in Syria’s cities now merits a full-on Western military intervention.

Max Boot, a senior fellow at the US-based Council on Foreign Relations, writes in the Financial Times comparing Syria with Rwanda and Srebrenica, and he blames all the horror on the “Assad regime” with a litany of outright falsehoods.

“No one is suggesting sending ground troops. But options range from doing more to arm the moderate opposition [sic], to declaring a no-fly zone. Drones could strike al-Qaeda operatives in Syria; air power could create humanitarian zones near the Turkish and Jordanian borders. The US could also take the lead in referring Mr Assad and his aides for war crimes prosecution.”

“The UN Security Council is unlikely to support such steps, but the US would not have to act alone. Allies from France to Saudi Arabia have been urging action and would be eager to co-operate. But they will do little as long as Mr Obama refuses to act.”

This hoary “Responsibility to Protect” appeal, which the US and its allies played as a pretext for imperialist regime change in Libya in 2011, is also reiterated by Danny Postel and Nader Hashemi in the New York Times, referring to the sieges in Syria as “moral obscenities” and blaming Russia as “a major obstacle” for its support of the Syrian government.

“We should invoke the Responsibility to Protect, the principle that if a state fails to protect its populations from mass atrocities — or is in fact the perpetrator of such crimes — the international community must step in to protect the victims… And if a multinational force cannot be assembled, then at least some countries should step up… to provide the necessary force on the ground, with air cover from participating nations.”

In case this hackneyed R2P appeal does not work, Western opinion formers are also lately lining up other “justifications” for military intervention in Syria, including the “threat from Al Qaeda to Western countries” and the destabilization of the region’s security from refugees fleeing the violence in Syria. All problems, it should be noted, which are created by previous cycles of destructive Western covert intervention in Syria.

How depraved can such thinking get? Creative solutions for Western imperialism flow from its very own destructive predations. Lost in the destruction, it seems, is any ability for intelligent reasoning and cognition among Western thinkers and planners to face up to the real nature of the problem in Syria – Western imperialism.

US, Allies ‘Arming Al-Qaeda’ in Syria by Finian Cunningham

They Never Announce When You Prevent a War by David Swanson