The Essays of The Man From the North by Rivera Sun
Writer, Dandelion Salad
March 2, 2014 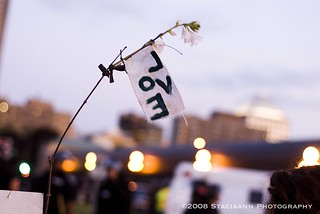 The Man From the North is a fictional writer in Rivera Sun’s novel, The Dandelion Insurrection. The novel takes place in the near future, in “a time that looms around the corner of today”, when a rising police state controlled by the corporate-political elite have plunged the nation into the grip of a hidden dictatorship. In spite of severe surveillance and repression, the Man From the North’s banned articles circulate through the American populace, reporting on resistance and fomenting nonviolent revolution. The novel can be found at http://www.riverasun.com/online-store/the-dandelion-insurrection/.

Look beyond this night of darkness to the dawn of tomorrow. There is a world beyond the apocalypse, a world beyond war, a world of music and dance; a world where the children are laughing and time stretches slowly; where the Earth lives in the hearts, minds, and souls of our people.

There is a world where the gaping wounds of today close into scars, and then those scars heal over and vanish. The crying of the Earth returns to a love song. Lamentations give way to rejoicing. The wealth of the people breaks through the dam of the elite. Fallow fields burst with life. The deserts bloom, fertile. The concrete cracks into green. The roar of destruction falls silent.

The churning smokestacks of today topple like dictators’ statues. Pipelines are dismantled and destroyed. The financing of war is diverted into peace. Schools are rebuilt, bridges repaired, and health is restored to us all.

Ignore the false prophets who tell you this vision cannot be! The empowered elite are addicted to the heroin of darkness. They will mutter like the devil, claiming such a world is impossible. They will try to frighten you into their clutches, subdue you with despair, and enslave you to a lifetime of suffering … but they have no vision of tomorrow and no hope for humanity. Their only promise is the continued hell of today.

My friends, do not believe them! Their world has no future – for them or for us! It is doomed. Its destiny is failure. For thousands of years, from the early invaders until now, their sickened strand of the human family has ruled. Their evolution is parasitic, colonizing, and all consuming. Their mentality is a disease gone viral. The world is infected by their religion of selfishness and greed. They turn our children into cannibals, dogs eating dogs, worshipping the survival of the fittest. The elite sit at the top of the heaving mass of humanity, profiting as we kill each other for their scraps.

They are carrion, death-eaters, vampires of humanity, blood-sucking parasites that will kill us. We are the host, the people and the planet. We must rise up together and stop them.

We must rise nonviolently with the determination of saints. We must rise with the confidence of doctors. We must rise with compassion, as lovers of the world, and we must remove the infection of destruction even from the elite, and return them to the wholeness of human beings. Greed and consumption are diseases of the mind; they are are not the truth of our nature. Beware of false prophets who claim that humans are locusts on this Earth. These prophets are infected with the virus, and delusional.

Listen to the people who speak with clarity and vision, the ones who blaze like beacons in the night. These shining lights of truth know the remedy for the sickness. The dawn of our future is rising in their hearts. Their vision is spreading like laughter rippling through a crowd. This darkness, the madness, the greed and destruction … it’s all a long cosmic joke! One-by-one, we are getting to the punch line … Love!

Love is the answer, they say, breaking into smiles. Centuries of hate, division, and greed have brought us to the brink of extinction. But love is the remedy that can save us.

Love one another, this Earth, and Live, itself! Love like there will be no tomorrow. Bring each other closer. Cooperate with each other. Join hands and collaborate on your future. Overwhelm the disease of hate with the remedy of love. Forgive, embrace, rejoice, and resolve that every last human being – and the wounds of the Earth – will be remedied by the love in your heart.

Now you know the truth and the truth lives in you. You are the herald of the world that is coming. Shout this vision from the rooftops! Sing it as a choir! Chant it in the streets, teach it to the children, proclaim it in halls of power, announce it on the radio, whisper it to each other until it breaks like a wave and crashes through our world, sweeping everywhere like the rising light of day. Live it, walk it, breathe it, be it … until the love of tomorrow joins hands with today, and the healing of the world embraces all.

Author/Actress Rivera Sun sings the anthem of our times and rallies us to meet adversity with gusto. In addition to her most recent novel, The Dandelion Insurrection, she is the author of nine plays, a book of poetry, and her debut novel, Steam Drills, Treadmills, and Shooting Stars, which celebrates everyday heroes who meet the challenges of climate change with compassion, spirit, and strength. http://www.riverasun.com

4 thoughts on “The Man From the North: The Dawn of Tomorrow is Today! by Rivera Sun”