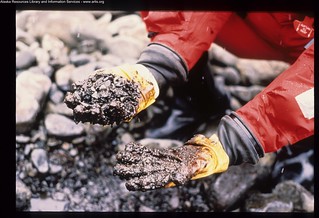 RT-TV Breaking the Set —- Abby Martin features an exclusive interview with investigative journalist, Greg Palast, discussing his article on TruthDig which exposes the extent of BP’s culpability in the Exxon Valdez oil spill 25 years ago, specifically for not providing adequate safety equipment, a criminal offense which was repeated in the 2010 Deep Water Horizon spill.

Greg Palast investigated fraud charges against Exxon and BP in the grounding of the Exxon Valdez for the Chugach Natives of Alaska, owners of the shoreline. He has continued to investigate BP and the oil industry for BBC TV and Channel 4 (UK) and The Guardian, expanded in his book, Vultures’ Picnic and the newly released film, Vultures and Vote Rustlers, available only from Palast’s not-for-profit foundation for investigative reporting.