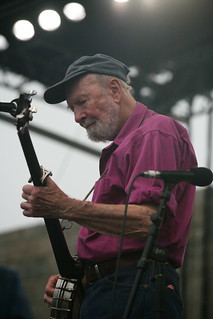 But in this space, I am not going to write about Pete the musician. This column is about Pete and the Blacklist, one of the darkest marks on 20th century US history, and quite different from the current TV show, “The Blacklist.” I was lucky enough to have heard Pete in concert in Carnegie Hall, New York City, singing with The Weavers in the late 1940s, before they were blacklisted. I had a brief personal contact with him during the blacklist-time. One way that performers like himself earned a living during that time was to do private performances in the homes of progressives. And so, in the early ’50s my mother hired Pete to sing at a birthday party for me, in our home. (Either the year before that or the year afterwards, for my birthday she hired another great, and black-listed, US folk singer, and composer, Earl Robinson. He is perhaps best-known for writing “Ballad for Americans” for yet another great, black-listed personage, the singer-actor Paul Robeson.)

I next saw Pete at one of his “coming-out parties” as the blacklist was fading in the late 50s. He was hired to sing in a dorm living room at Vassar College, where my girl-friend at the time was a student. I have heard him concerts several times since. Finally, by happenstance I went to what was likely his last concert, with Woody’s son Arlo, at Carnegie Hall, New York City, on December 30, 2013.

So for those of you who might not know, or know about it vaguely, what was the real “Blacklist?” It was literally a list of peoples’ names, put together primarily by a private witch-hunting organization called “Red Channels.” It worked closely with the notorious House Un-American Activities Committee, Joe McCarthy and his minions, and many other organizations and individuals who spent many years promoting the “Red Scare.” The upshot of being “listed” was most often the loss of employment and the great diminution of opportunities to gain further employment in one’s profession.

Some of the affected people finked out and “named names.” If they named enough of them, either publicly, or privately like a Hollywood B-movie actor named Ronald Reagan did, they were let back in. Some artists who would not cooperate went abroad, like the spectacular harmonica virtuoso Larry Adler. He established a career in England, where he became a beloved performer. I was lucky enough to hear a radio interview with him, made late in his life. He was asked what he thought was the greatest thing he had done in his life, a life in which he virtually created virtuoso harmonica playing, and was widely applauded for it, for many years. Without hesitation, he replied “I never ratted on my friends.”

And so, what was the Blacklist for? The Blacklist was used to punish people, professionally an economically, for their beliefs and for political activities, none of which were illegal. Yes, in the “Land of the Free and the Home of the Brave,” in a nation that had just finished fighting a war for the “preservation of freedom and democracy,” people were punished for their beliefs, say in promoting peaceful relations with the Soviet Union, or in promoting alternatives to capitalism, for being members of the Communist Party of the United States, like Pete was. Ironically, the CPUSA was not a revolutionary party. In the Party’s charter was a clause (that is still there) that it was committed to what was called the “Parliamentary Road to Socialism.” Definitely non-violent.

Or punished for heading an openly anti-fascist organization, like the Joint Anti-Fascist Refugee Committee, chaired by my childhood mentor and role model, Edward K. Barsky, MD. Eddie had been at one time the head of the Medical Unit for the whole of the International Brigade in Spain, during the Spanish Civil War, 1936-39 (the opening salvo of World War II). The Committee had been formed to help those who, following the end of the Spanish Civil War, in 1939 had fled the Franco fascists for miserable camps in the South of France. Like Eddie, who went to jail for four months for “contempt of Congress,” and courtesy of the New York State Board for Medicine, had his medical license suspended for two years because of that, people were punished for refusing to answer questions before HUAC and other similar committees at the Federal and state levels, inquiring into their beliefs, memberships, and who they knew (when often the committee already had all the names they wanted to have), NOT for undertaking any otherwise illegal activities.

That was the real Blacklist. It punished people economically and socially for their beliefs. The blacklist worked hand-in-glove with those forces that were promoting the Red Hysteria to pump up the public for the prosecution of the Cold War against the nation that had just a few years before had been our close war-time ally and the bulwark against the German Nazi war machine. Virtually no one who was blacklisted could be accused of a crime, because they didn’t commit any. But they suffered in their lives. Many, like Pete and Eddie, were strong enough to weather it through. But then there were those who never made it back and even those who committed suicide. An irony that few know about is that in the Woody Allen movie about the blacklist, “The Front,” the part of a character based on a real black-listed show business person, who jumped out of a window, was played by the great Zero Mostel, who himself had been black-listed.

It happened that even the Communist Party of the United Sates was not a revolutionary party (which would have been illegal). Ironically, when the CPUSA leadership was put on trial in 1948 charged with violating something called the Smith Act, they had a very interesting defense. The Smith Act had made it illegal to conspire to overthrow the government of the United States by force and violence. One did not actually have to do anything along those lines. One only had to get together to possibly talk about possibly doing so. The ironic defense of the CPUSA leadership was that in the Party’s charter was a clause (that is still there) that it was committed to what was called the “Parliamentary Road to Socialism.” Definitely non-violent. They used this in their defense but it was ignored. They were convicted, as were many state CPUSA leaders, at their respective state levels. The Smith Act, by the way, was eventually declared unconstitutional by the Warren Supreme Court.

Steven Jonas, MD, MPH is a Professor of Preventive Medicine at Stony Brook University (NY) and author/co-author/editor/co-editor of over 30 books. In addition to being a columnist for BuzzFlash@Truthout, he is the Managing Editor of and a Contributing Author to The Political Junkies for Progressive Democracy (http://thepoliticaljunkies.org). Dr. Jonas’ latest book is The 15% Solution: How the Republican Religious Right Took Control of the U.S., 1981-2022: A futuristic Novel, Brewster, NY, Trepper & Katz Impact Books, Punto Press Publishing, 2013, and available on Amazon.

Remembering Folk Legend and Activist Pete Seeger + Solidarity Forever + Which Side Are You On?

LeiLani Dowell: Imperialism at home and abroad: Policy or system of exploitation? + Pete Seeger: Which Side Are You On?

2 thoughts on “Pete Seeger Should Have Been Given a Presidential Medal of Freedom, Not Put on McCarthy’s Blacklist by Steven Jonas, MD, MPH”