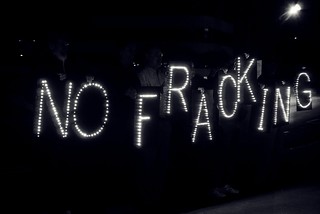 Common Pleas Court Judge Kenneth W. Seamans, Friday, revised a preliminary injunction he issued in October against the anti-fracking activist. That injunction had required the 63-year-old grandmother and retired nurse’s aide to stay at least 150 feet from all properties where Cabot had leased mineral rights, even if that distance was on public property. Because Cabot had leased mineral rights to 40 percent of Susquehanna County, about 300 square miles, almost any place Scroggins wanted to be was a place she was not allowed to be. The injunction didn’t specify where Scroggins couldn’t go. It was a task that required her to go to the courthouse in Montrose, dig through hundreds of documents, and figure it out for herself.

The injunction, says Scott Michelman of Public Citizen was “overbroad and violates her constitutional rights to freedom of speech and freedom of movement.” Public Citizen, the Pennsylvania ACLU, and local attorney Gerald Kinchy, represented her Monday when she sought to vacate the order. At that hearing, Cabot wanted the buffer zone extended to 500 feet, but couldn’t show any reason why 500 feet was necessary.

Seamans’ revised order prohibits Scroggins from going within 100 feet of any active well pad or access roads of properties Cabot owns or has leased mineral rights. Land not being drilled, but which Cabot owns mineral rights, is no longer part of the injunction. That 100 feet separation is still far more than most injunctions call for; even abortion clinics typically have 15 feet exclusion zones to prevent violence, according to the brief filed in Scroggins’ behalf. Although Seamans agreed that his preliminary order may have been broad and violated Scroggins’ First Amendment rights, the revised injunction probably still violates her First and Fourteenth Amendment rights.

When Scroggins first appeared in court in October, she didn’t have lawyers. She had been served papers to appear in court only the Friday before the Monday hearing. That day, she faced four lawyers representing Cabot. She asked for a continuance, but Seamans refused to grant her one. Seamans told Scroggins that to grant a continuance would inconvenience three of Cabot’s lawyers who came from Pittsburgh, more than 250 miles away. He also told her she might have to pay travel and other costs for the lawyers if she was successful in getting a continuance.

And so, Cabot presented its case against Scroggins.

Scroggins agreed that she used public roads to get to Cabot properties. For five years, she has led tours of private citizens and government officials to show them what fracking is, and to explain what it is doing to the health and environment. But, with rare exceptions, she was always polite, never confrontational. And when she was told to leave, she did, even if it sometimes took as much as an hour because Cabot security often blocked her car. Cabot personnel on site never asked local police to arrest her for trespassing.

Scroggins tried several times to explain that while near or on Cabot drilling operations, she had documented health and safety violations, many of which led to fines or citations. Every time she tried to present the evidence, one of Cabot’s lawyers objected, and Seamans struck Scroggins’ testimony from the record. Cabot acknowledged Scroggins broke no laws but claimed she was a “nuisance.”

Scroggins tried to explain that she put more than 500 short videotapes online or onto YouTube to show what fracking is, and the damage Cabot and other companies are doing. Again, Seamans accepted Cabot’s objection, and struck her testimony.

And that’s why Cabot wanted an injunction against Scroggins. It had little to do with keeping a peaceful protestor away; it had everything to do with shutting down her ability to tell the truth.

The original injunction, and possibly the revised injunction, violated her rights of free speech by severely restricting her ability to document the practices of a company that violated both the public trust and the environment, according to citations filed by the state’s Department of Environmental Portection. According to the brief filed on her behalf, “The injunction sends a chilling message to those who oppose fracking and wish to make their voices heard or to document practices that they fear will harm them and their neighbors. That message is loud and clear: criticize a gas company, and you’ll pay for it.”

The preliminary injunction also violated her Fourteenth Amendment rights of association and the right of travel; Scroggins couldn’t even go to homes of some of her friends, even if they invited her. That’s because they had leased subsurface mineral rights to Cabot. However, Cabot never produced a lease, according to what her attorneys presented in court, to show that “it had a right to exclude her from the surface of properties where it has leased only the subsurface mineral rights.”

Not everyone agrees with Scroggins or her efforts to document the effects of high volume hydraulic horizontal fracturing, known commonly as fracking. Many consider her to be a pest, someone trying to stop them from making money. Hundreds in the region have willingly given up their property rights in order to get signing bonuses and royalties from the extraction of natural gas. Their concern, in a county still feeling the effects of the great recession that had begun a decade earlier, is for their immediate financial well-being rather than the health and welfare of their neighbors, or the destruction of the environment.

Vera Scroggins never planned to be among the leaders of a social movement, but her persistence in explaining and documenting what is happening to the people and their environment has put her there. Cabot’s “take-no-prisoners” strategy in trying to shut her voice has led to even more people becoming aware of what fracking is—and the length that a mega-corporation will go to keep the facts from the people. No matter what Seamans did to reduce the sweeping impact of the original order, or what will happen May 1 when Scroggins and Cabot will again be in court, Cabot has lost this battle.

Dr. Brasch is an award-winning journalist and professor emeritus of mass communications. His latest book is Fracking Pennsylvania, an in-depth documented exploration of the economic, health, and environmental effects of fracking, with an underlying theme of the connection between politicians and campaign funds provided by the oil/gas lobby.

An Injunction Against the First Amendment by Walter Brasch

Workers Are Disposable in the Fracking Industry by Walter Brasch

An Injunction Against the Truth by Walter Brasch