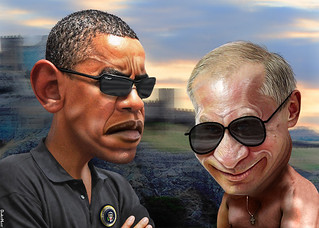 It is now 2014 and things have changed. Putin, no longer disconcerted by the political and media conspiracies of the USA and its puppets, can handle Western hypocrisy, distortions, lies and threats just fine. In fact, as anyone who has watched Obama’s recent defensive, sheepish, performances might surmise, he’s doing much better than the U.S. is.

The current offensive against Putin began with the 2014 Olympics which the U.S. media/government tried to convince Americans to boycott due to the terrorist threat. What terrorist threat? The perception of the participants and reporters seemed unanimous: with over a billion dollars spent on keeping Sochi crime free, it was probably the safest place on earth. No matter. Even as the spectacular, uneventful games drew a close, with American tourists notably absent – an act of economic terrorism? – TV’s talking heads were still shilling for a ‘terrorist threat.’

Putin gave no indication that he had even heard.

The only simmering threat then – what miraculous timing! -came from brand-new fighting in the Ukraine, where the democratically elected Ukrainian president was driven out after he opted for closer ties with Russia instead of the EU. Since major areas of Ukraine speak Russian and identified as Russian, especially in the east and south, it should have come as no surprise.

And it didn’t. The West could see the writing on the wall and quickly began preemptively threatening Russia that it had better stay on the sidelines. Or else.

Putin, who didn’t seem to be shaking in his boots, did.

Although Russian troops were in Crimea as part of a prior agreement with Ukraine for the security of the Russian naval base in Sevastopol, Russia did not invade the country, according to Russian officials and eyewitness accounts. For telling the unacceptable truth, the Russians were denounced as liars in the Western media.

If Putin was annoyed, he never let on.

The successful Crimean referendum to re-join Russia was roundly denounced in the Western press as corrupt, despite reports to the contrary of international observers. It was reported in the US that the overwhelming pro-Russia plurality of the vote was due to having only one option printed on the ballot. That bit of news came with pictures of the multiple choice ballot.

After Crimea exercised its rite of self determination at the ballot box, Russia lost no time in annexing it as the Crimeans had wished. Putin’s speech was accompanied by massive cheering in Crimea and Moscow and by a predictable tantrum from the US, which then imposed a few meaningless sanctions and urged its reluctant EU puppets to go along.

Putin said nothing, although you could hear the guffaws of Russian officials all the way to Washington.

The U S has been reduced to dire predictions of Russian aggression elsewhere in the world, although there has been no sign of this in word or deed coming from the other side, and to threats of even more sanctions. Saber rattling, however, has been notably absent as the US grudgingly withdraws its meddling in these particular Russian affairs. Its plans to wrest away Russia’s Black Sea naval bases and the gas fields in Crimea will have to wait. Maybe forever.

Did Putin gloat at the ineffective and largely irrelevant US designs on the Russian periphery? Did he make a point of American hypocrisy? Did he insist on a reversal of the coup against the democratically elected president that brought neo-Nazis to power in Ukraine? No. Well, OK. He did say we were hypocrites.

Observers, including some in the US, have noted that the misinformation and blatant lies surrounding Russia’s actions in the Ukraine have been over-the-top and cannot stand for long. We’ll see.

Putin’s statesmanlike demeanor during the Western-inspired ordeal of the past months made him the only adult in the room, a fact not lost on his newly adoring fans, by the millions, in Moscow, Crimea and elsewhere. Cheers for his leadership also came from Russian speaking Ukraine, which may well be the focus of the next US tirade. There are already signs that other Russian speaking areas in eastern and southern Ukraine have no more patience for the US supported, fascist, government in Kiev than Crimea did. They may be the next to seek independence, especially as IMF demands take hold.

Putin’s refusal to entertain the idea of relinquishing Crimea and his hard nosed non-negotiating style in the face of massive pressure from the West, has given him a new platform, new popularity, and new esteem around the world, especially among struggling nations sick and tired of Western meddling.

Through our own efforts, the US has removed Vladimir Putin from the ranks of ordinary politicians and elevated him to the political version of a rock star, and turned the Leader of the Free World into something that looks like a caricature. Is the end of US hegemony visible in the distance?

US Sets Europe and Russia at War by Finian Cunningham

Western Unity Against Russia a Masterpiece of Illusion by Finian Cunningham

Obama to Putin: Do as I Say Not as I Do by Ralph Nader

26 thoughts on “Vladimir Putin: Rock Star Made in America by Cameron Salisbury”