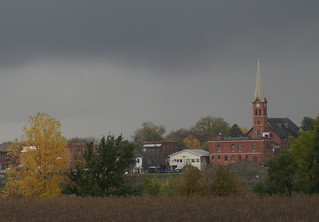 Perhaps there are lessons for other small communities from the conditions, positive and negative, of Winsted, Connecticut (the Town of Winchester), a community of about 11,000 people nestled in the beautiful Litchfield County Hills.

First, Winsted is unique in numerous ways. Northwestern Connecticut Community College, established in 1965 through local initiatives, has expanded its facilities. Winsted is the second smallest community in the U.S. to have a community college located within its boundaries. About the size of Manhattan in New York City, the Town of Winchester sports two lakes plus Crystal Lake, the drinking water reservoir, two rivers named Mad and Still, and an abundance of woods and meadows.

When its Winsted Memorial Hospital closed in 1996, the citizens did what no one else had managed to do after losing their hospital. They mobilized and reopened the closed facility with the Winsted Health Center, offering hospital level services except for overnight stays.

The country’s first law museum (the American Museum of Tort Law) and the first art museum devoted exclusively to America’s working men and women (the Wall of America) are being built in Winsted. These are not far from the fine Winchester Historical Society. Winsted is served by two newspapers – the weekly Winsted Journal and the daily Torrington Register-Citizen, and a vibrant cable access channel, where the Community Lawyer shares a program.

The Winsted Volunteer Fire Department with its three stations has continued to serve its people since 1862. A fourth station was added a decade later. Visitors have observed the architectural beauty of the churches in this community. The Town Hall and Post Office are easily accessible on Winsted’s Main Street. A new pottery studio has opened with cubicles for pottery artists and eager newcomers.

Winsted even has two summer camps for children from the cities.

Unlike most municipalities outside of New England, Winsted has the ultimate democratic town meeting, referendum form of local government. If used in an informed manner, it is hard to make excuses that the residents cannot be in charge, to the extent permitted by state and federal mandates.

Yet, notwithstanding Winsted’s many attractive features, there is a serious absence of operating civic pride among many of its residents that holds back their community. Even before Winsted’s hitherto, bustling factories closed or left town after World War II, before the county courthouse moved away, before the railroad station was closed, talking down Winsted made up too much of the people’s small talk.

To be sure, the scars of these losses remain. Jobs are hard to find in town, especially for the youngsters graduating from the local high school. Now more of a bedroom community, job holders commute to Hartford and other Connecticut cities to earn their living. One result is that there is less time for and interest in participating in local civic and political work, though there are still numerous clubs (Rotary, Kiwanis, Elk, Lions and Knights of Columbus) that provide opportunities for social interactions.

The decline of the local economy has lessened the ability of many residents to pay for the repairing and upgrading of the public works. However, year after year of deferred maintenance leads to rundown streets, bridges, sidewalks and other public facilities and increases the costs of eventual restorations.

Each generation of young residents tend to disparage their hometown as they move out. With the advent of the internet’s virtual reality and the introverted self-absorbing, 24/7 enabling gadgets, the separation from the reality of their town and its older historically-minded residents grows.

As the town’s fiscal health deteriorates, demoralization sets in under the cries of those who accentuate the negatives and ignore the positives, instead of embracing the pathways toward recovery. One result is that good people in Town Hall quit their jobs. Yet, the town manager, Dale Martin, remains solidly optimistic. Another consequence is that there is low voter turnout. A third result is that fewer people want to run in elections for town government positions and its various boards, even though very little money is needed for their campaigns. Potential candidates can almost walk the entire town, its hill country and around its seven mile, home-studded Highland Lake.

Throughout our country, communities are turned around first by the organization of enough civic character and steadfast civic personality to make the difference. A small number of determined people can tap the many under-utilized assets of their community and carry the day. I would guess that in Winsted, about one hundred people of diverse talents, including the younger generation, can forge the path to recovery, with the support of a more silent majority.

There are enough lessons from American history where towns such as Winsted can find encouragement from those who have overcome much greater odds. There are plenty of manuals, articles, case studies and available federal and state help so that civic revivalists need not re-invent the wheel. Visit Kettering, New England Futures or the Citistates Group for more information.

There are also local traditions of civic resiliency in the history of every community. Winsted overcame three devastating floods from the nineteen thirties to the mid-nineteen fifties, until civic pressure on key political figures from Washington to Hartford got a dry dam built. No floods since.

People who give up on their civic pursuits, citing futility, often have overcome far more challenging hurdles in their own personal family and work life – illnesses, unemployment, accidents and other fateful pressures. Civic organization can produce a better community – it’s a lot easier than we think!

Ralph Nader: How is Your Civic Life?