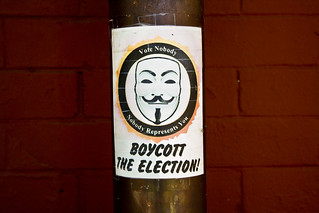 The recent Supreme Court ruling removing limits to campaign financing should be the final straw on the camel’s back of the American people. Democracy in our country is a standing joke . . . and the trend of politics-for-sale is no longer funny. Wealthy elites and mega-corporations have created a modern day Court of Versailles in which the super-wealthy profit from the abject poverty of the rest of us. The Marie Antoinette’s of our day cut food stamps for impoverished children while crying, “Let them work for their cake!”

Washington D.C. is an upper-class court of avaricious elites manipulating the population into wage-slavery and debt servitude. The 2016 Presidential election will be a charade of Money vs. Money as the two leading oligarchical families vie to return to the White House. Regardless of who wins, the outcome is the same: the rich will get richer; the poor will get poorer. The elite will win; the people will lose.

Let’s call the whole thing off. No elections. No millionaire candidates. No sickening advertisements full of lies and false promises. The wealthy elites can save their money. We aren’t buying it this year.

We, the people, will boycott the election.

Throughout history, populaces around the world have thwarted dictatorial control by boycotting corrupt elections and denying the regime all legitimacy. The Serbian Revolution was won on the pivotal day of elections by the people’s denial of legitimacy to the alleged winners.  Throwing the falsified newspaper announcements out the window of the Capitol Building, the people denied the regime access to power and inserted a temporary government until valid elections could be run.

The United States could use this technique of boycotting corrupt elections as part of a strategy to remove money from power and reverse 150 years of Supreme Court precedence in which corporations claim personhood and money is speech.

Here is how this works. We must:

2) Declare our intention to boycott the corrupt elections

3) Call upon the Third Parties to emulate Olympic athletes, and refuse to participate in competitions sponsored by tyrannical governments.

4) Call on majority party officeholders and candidates to take a position of conscience and join us in the boycott.

5) Deny all legitimacy to the individuals elected through corrupt elections.

6) Refuse cooperation with the authorities until new elections with campaign financing limits, removal of corporate contributions, and fair access for all candidates of all economic classes are guaranteed.

Outrageous as this may sound, this course of action is far saner than complying with the corporate and wealthy elite and lending them credibility by our participation in their totally corrupt system. It is more rational than expecting this system to correct itself. It is more sensible that waiting for the Supreme Court to reverse its ruling. And, it is more likely to succeed in demonstrating the refusal of the American people to submit to the tyranny of wealth than to lie down like dogs and pray for a miracle.

Chris Hedges has been openly calling for rebellion for years. I am now telling you how to begin. Although there are many other components of a comprehensive strategy, this suggestion should give a sense of the scope of nonviolent force necessary to remedy this situation. If we continue to participate in this abject whoring of democracy to wealth, we will find ourselves in Nov 2016, casting votes in an election in which only the uber-wealthy can compete; in which the rich man’s voting machines churn out the rich man’s results; and in which the people of this nation have no vote.

In 2013, former President Jimmy Carter publically stated that, “America does not have a functioning democracy at this time.”  It certainly does not have one now.

We have come full circle in the course of human events. Instead of a king, we have a handful of oligarchs. Instead of the Crown, we have Corporations. But, once again, the rights of the people are illusory. The systems of justice have betrayed us. The powerful enslave us to poverty while they profit from our misery. The time for rebellion has come.

I urge us to boycott the elections of wealthy elites and corporatized candidates. I ask us to declare our opposition to the Supreme Court’s rulings publically. I request that we, as a people, deny all validity to officials elected through the abject tyranny of money. I encourage us to step beyond voting for the “lesser of two evils” and boycott the whole system of evil.

If we must, we can set up parallel elections. Equal, open, limited financing, multiple party elections with reliable voting technology, and certified by the United Nations and the Carter Center, which watchdogs elections around the world (yet cannot currently guarantee the results of American elections). The results of these parallel elections can be proclaimed by the people to be the legitimate officeholders. As I mentioned earlier, this process has been used around the world, successfully and powerfully.

And yes, my friends, I am urging revolution . . . nonviolent, powerful, organized revolution. The time has come. Our causes are just. Our grievances are real. We, the people, should not – we will not – for the sake of our children, our planet, and our future, we cannot tolerate this utter corruption of democracy.

Shutdown Solution: Opt Out of Tyranny by David DeGraw