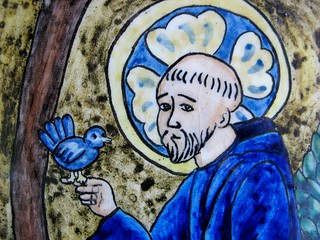 Francis of Assisi is a 1961 DeLuxe CinemaScope film directed by Michael Curtiz, based on the novel The Joyful Beggar by Louis de Wohl. It was shot entirely in Italy. The film was not a box-office success. It starred Bradford Dillman in one of his few sympathetic leading film roles (he usually played a villainous character onscreen, despite having originated the role of Jamie in the original stage version of Eugene O’Neill’s Long Day’s Journey into Night in 1956).

Two years after the release of Francis of Assisi, Dolores Hart, the 24-year-old actress who plays a nun in the film, became a real-life Roman Catholic nun at the Benedictine Abbey of Regina Laudis in Bethlehem, Connecticut.[3]

Francis Bernardone (Bradford Dillman) is the son of a wealthy cloth merchant in Assisi, who gives up all his worldly goods to dedicate himself to God. Clare (Dolores Hart) is a young aristocratic woman who, according to the film, is so taken with St. Francis that she leaves her family and becomes a nun. By this time (1212 A.D.), St. Francis has a well-established reputation for his vows of poverty. The movie goes on to note miracles (such as the appearance of the stigmata on Francis’s hands and feet) and other aspects of his life, up to and including his death on October 3, 1226.[4]

Francesco is a 1989 docu-drama relating in flashback St. Francis of Assisi’s evolution from rich man’s son to religious humanitarian and finally to full-fledged saint. The film was based on Hermann Hesse’s Francis of Assisi, which director Liliana Cavani had previously filmed in 1966. It was shot in the Italian region of Abruzzo and it stars Mickey Rourke and Helena Bonham Carter. Greek composer, Vangelis, provided the musical score.

Raised as the pampered son of a merchant, Francis goes off to war, only to return with a profound horror for the society which generated such suffering. In one scene, as an act of renunciation, he strips himself of his fine clothing in front of his father, and leaves the house naked and barefoot, joining the lepers and beggars in the poor section of town. A series of episodes from Francis’ life follows, rather than a coherent narrative, until his final days when he receives the stigmata, the wounds Christ suffered at the crucifixion.