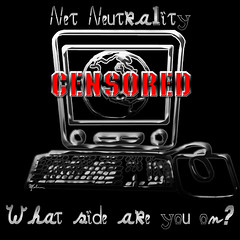 The new rules would allow Internet service providers to charge an extra fee to content companies for preferential treatment, guaranteeing their content reaches end users ahead of those that do not pay. The rules are now circulating among the FCC commissioners and are expected to be be voted on at the next public FCC meeting on May 15.

“With this proposal, the FCC is aiding and abetting the largest ISPs in their efforts to destroy the open Internet. Giving ISPs the green light to implement pay-for-priority schemes will be a disaster for startups, nonprofits and everyday Internet users who cannot afford these unnecessary tolls. These users will all be pushed onto the Internet dirt road, while deep-pocketed Internet companies enjoy the benefits of the newly created fast lanes.

“This is not Net Neutrality. It’s an insult to those who care about preserving the open Internet to pretend otherwise. The FCC had an opportunity to reverse its failures and pursue real Net Neutrality by reclassifying broadband under the law. Instead, in a moment of political cowardice and extreme shortsightedness, it has chosen this convoluted path that won’t protect Internet users.

“This approach is almost certain to be rejected by the courts. Contrary to statements by Chairman Wheeler, the court did not invite the FCC to pursue this path. The court clearly told the FCC that if it wishes to ensure Internet users can send and receive information free from ISP interference, then the FCC has to classify ISPs as telecom carriers under Title II of the Communications Act.

“The FCC apparently doesn’t realize the dangerous incentives these rules would create. The routing of data on the Internet is a zero-sum game. Unless there is continual congestion, no website would pay for priority treatment. This means the FCC’s proposed rules will actually produce a strong incentive for ISPs to create congestion through artificial scarcity. Not only would this outcome run counter to the FCC’s broader goals, it actually undermines the so-called Section 706 legal basis for these rules.

“This proposal is short-sighted and should be strenuously opposed by the broader Internet community — including millions of Americans who have urged Chairman Wheeler and his predecessors to safeguard the open Internet. The only parties cheering this idea on will be the largest ISPs that stand to profit from discrimination. We urge Chairman Wheeler’s colleagues not to support this item as currently drafted and to demand nothing less than real Net Neutrality.”

The FCC is considering new rules for internet service providers that would harm a key principle of net neutrality. Here’s what you need to know — and what you can do:

Federal regulators have unveiled new rules that would effectively abandon net neutrality, the concept of a free and open Internet. The proposal from the Federal Communications Commission would allow Internet providers like Verizon or Comcast to charge media companies like Netflix or Amazon extra fees in order to receive preferential treatment, such as faster speeds for their content. If the new rules are voted on next month, the FCC will begin accepting public comments and issue final regulations by the end of summer. “What we’re really seeing here is the transformation of the Internet where the 1 percent get the fast lanes, and the 99 percent get the slow lanes,” says Michael Copps, retired FCC Commissioner. “If we let that happen, we have really undercut the potential of this transformative technology. This has to be stopped.”

[I posted these petitions and video on another post recently, but feel that they need a bit more attention. So here they are again.]

Stop the FCC from Breaking the Internet

People everywhere understand that the Internet is a crucial driver of free speech, innovation, education, economic growth, creativity and so much more. They demand real Net Neutrality rules that protect Internet users from corporate abuse.

But the Federal Communications Commission is proposing rules that would kill — rather than protect — Net Neutrality and allow rampant discrimination online.

Under these rules, telecom giants like AT&T, Comcast and Verizon would be able to pick winners and losers online and discriminate against online content and applications. And no one would be able to do anything about it.

We must stop the FCC from moving forward with these rules, which would give the green light to ISPs eager to crush Net Neutrality.

The agency can preserve Net Neutrality only by designating broadband as a telecommunications service under the law. Anything else is an attack on our rights to connect and communicate.

The FCC is now moving to end net neutrality. Three months ago, Demand Progress and RootsAction joined with allied groups to deliver a petition with a million signatures to the FCC in support of net neutrality — to keep the whole Internet available to everyone. The news just broke that the FCC intends to blow us off and betray the principle of equal access to the Internet.

Digital rights groups are mobilizing over rumors the Federal Communications Commission may be about to abandon the principle of net neutrality. Organizations are concerned the agency may release new rules allowing companies to pay internet service providers to deliver their content faster than the content of competitors. The agency attempted to implement regulations ensuring net neutrality in the past, but a federal court struck down the move. Executive vice president of the National Hispanic Media Coalition Jessica Gonzalez speaks with RT’s Ameera David to break down net neutrality and what it means for the public.

Federal Communications Commission Chair Tom Wheeler spoke with reporters after the May FCC meeting about the vote for open Internet rules and the spectrum auction. Chair Wheeler said that the open Internet proposal did not authorize “fast lanes” or prioritization. He stressed that because of court rulings there was nothing on the books to stop Internet providers from discriminating or blocking content and this proposal seeks to stop that from happening.

5 thoughts on “FCC Proposal for a Payola Internet Would End Net Neutrality by Timothy Karr + Stop the Internet for the 1%!”